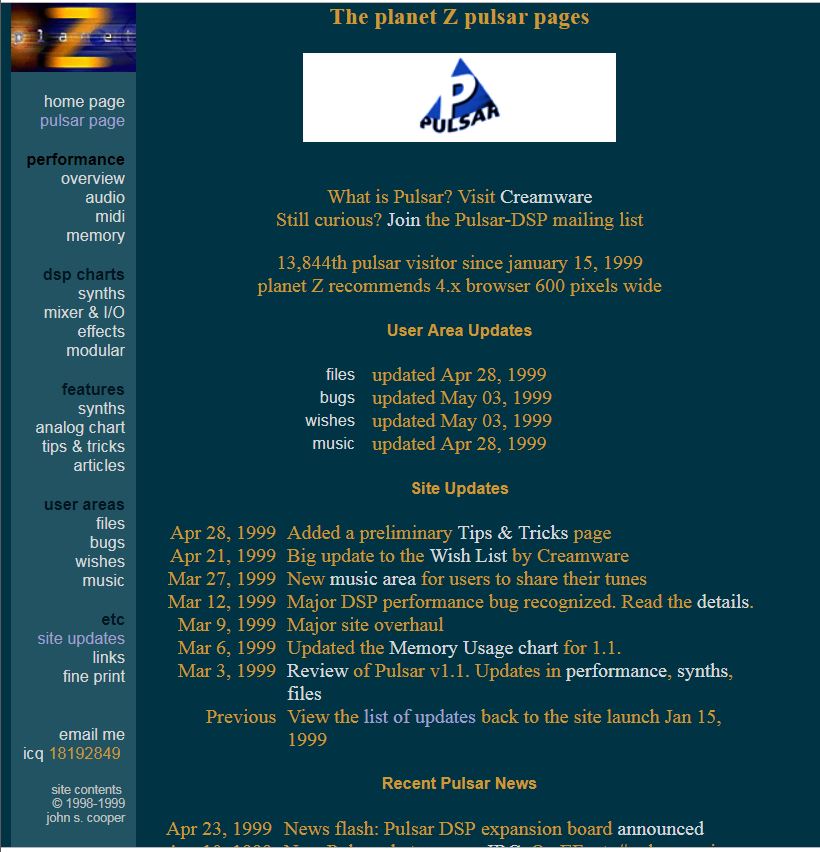 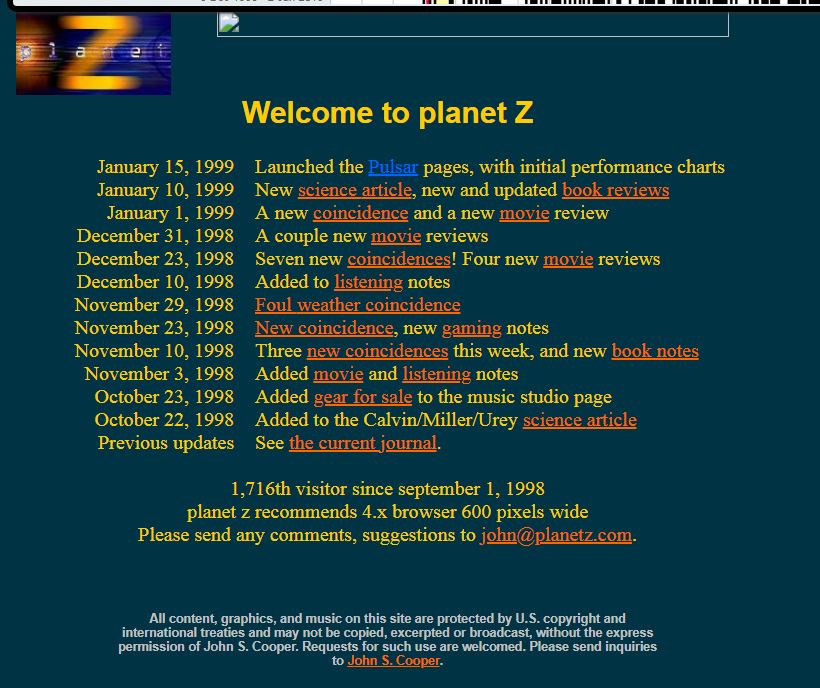 Congratulations to all of you

Congratulations to all of us. Special mentions to John Cooper, Valis and GaryB, to whom i would like to endorse my full appreciation for the work they put on this marvelous community.
Thank You
Top

Happy birthday to all of us, and may PlanetZ live and thrive for another 20 years

I got my first system in 2000 and joined here the following year, so not quite 20 for me, but not a bad innings. Thanks to those that made it a pleasant journey, with the occasional low points and feedback obsessed trollboys

cheers to everyone on planet z
Top

I’m a dozen here.
But in 2004 some talented asshole set up the keyboard rig with pro cards.
I was hooked.
What’s sad is he made some great Modular synths and FX.
I’m never seen them here.

Also ran into a pair of Japanese Scope geeks.

Was glad when I got home Scope cards dropped from their 2k price down to 1100 iirc.

12 more years for Scope and the Z.

I love that old Screenshots

I remember this Was the Modem time, each Minute cost money online

I bought my first pulsar in 1998 and a A16 Audiobahn {I still use it, but I have 3x of them}. Before I started with tripledat in 1996...(still have it for emotional reasons)
I keep the faith! Why selling always everything for something New?

out and about for music production. Are you still configguring your Studio

It's been only about 12 years here for both SCOPE and PlanetZ (since 2007), Still passionate about my SCOPE gear after all these years, still love using it, it's still the heart of my studio, still look forward to latest SCOPE software and plugin releases, still read the latest posts here on PlanetZ (usually daily unless really busy) and have no need for change. Congradulations all of PlanetZ and hopefully another good 20 years come!
Top

20 years for me too... not counting the few month waiting for the pulsar to be released and delivered....

when was Pulsar available exactly anyway ? when I had mine, I think planetz was existing already (or may be it's when i got my scope )
plug-ins for scope
SpaceF website
SC website
Top

A little personal history with planetz...
It was late spring, probably may, when a friend introduced me to someone who had bought 2 Pulsar1's.
Probably 1999, ... But reading this topic, it must have been '98 cos it wasn't released before that. Though that guy was a great DJ, he had no clue what to do with the DSP cards, had never heard of MIDI or computer audio. So by summer he gave me one of his Pulsar1's, to figure it out and explain it to him. A year later we had moved in together, threw our gear on one bigger heap and we both had a larger studio \o/
Later he sold me his Pulsar1's. By then I got my own place, added a Pulsar2, and a Scope card. Not sure, but I think borg then bought these Pulsar1's from me.

I was beta-testing for DeFeX, nowadays Neutron7, since the early Pulsar1 days, as was Michu. We'd spend friday nights working, brainstorming and chatting over ICQ. Michu (or was it Valis?) suggested I'd come over to efnet IRC, and /join #pulsarmusic. Folks had been idling there for some time, but soon the place was on fire. Amongst the channel regulars were ReD_MuZe, Valis, Michu, budz_ and me, often alfonso joined, too. I learned so much these days.

Assaf Dar, who worked with John Cooper in Orbitone for some years already, founded Adern with Eyal. We founded a private channel for development and testing discussions. First Vorb was released, still under Orbitone, but the gfx of Vorb already have Valis' signature (and no longer Sander Baan's). Soon after Vorb a new release was announced, this time of a revolutionary modular pack: FleXoR. For example, it took almost 20 years for other music software to start catching up with Flexor's sample-rate modulation. Assaf and Michu are still working together, nowadays in Polyverse.

We'd visit each other for holidays in exotic places like Tel Aviv, Rome and my cosy lil village on the river in the north, combining the beach and historic places with late night sessions of patching in modular. Sometimes we'd even make a tune, like here or here.

Great times we had, and great friends we made.
Thanks, z.
more has been done with less
https://soundcloud.com/at0m-studio
Top

I was in there myself (with my old nick "piddi", my current NTN was actually made when Dawman said he would give his Scope cards away for next to nothing when he got his Xite , but the jedi mind trick never worked). Had lots of fun in there, but for sure i wasn't the most active guest. Man, those were the days

A positive attitude may not solve all your problems, but it will annoy enough people to make it worth the effort.
Top

I'm still in irc, but sadly that channel had someone else's bots in it at the end and eventually they recognized noone and would not give up ops, so I gave up on it. I'm over at a few other smaller/private IRCd's more often than EFnet these days, but IRC will never die

valis wrote: ↑
Tue Jun 04, 2019 7:06 pm
I'm still in irc, but sadly that channel had someone else's bots in it at the end and eventually they recognized noone and would not give up ops, so I gave up on it. I'm over at a few other smaller/private IRCd's more often than EFnet these days, but IRC will never die :)

We had abandoned #pulsarmusic long time ago for #scope, and there's still icecool's digidude bot in #scope.
Here's an idea, I'll be back in there for old time's sake. Can contact icecool if others join in.. so, feel free to join! For those with no regular connection, I suggest friday evening's at http://chat.efnet.org:9090/?channels=scope Who knows =)
And yea, me too I'm on private ircd's mostly, but at0m is still on freenode, #edmproduction, #ardour and #opensourcemusicians for example. In the latter I met some folks from #dnbproduction, and the first ever support guy of Creamware frequents there, too. Even met another pulsarian there last month :)
more has been done with less
https://soundcloud.com/at0m-studio
Top

Haven't heard from Michu for ages. We used to have regular e-chats and I even met him in Poland when I went there on holiday and got very drunk on various different vodka drinks. Glad he's still active even if it's not here.
Top

Joris you went and uploaded the hippie jam on soundcloud

Haven't had a clue this was back up. Last time i fired up Pulsar PC was about 7 years ago. still have it, tho' i've no idea if it still works

just because you cannot imagine something that doesn't exclude it from reality.
Top
Post Reply
64 posts