Request a new device/modular module, and hope that some enterprising developer grants your wish!

Gaslight_Twilights wrote:Man, if S|C put out a group of effects like UAD, they would blow UAD out of the water. With Scope's collection of synths, virtually unlimited routing options, superior converters and pre amps, and thoudands of other things that make Scope incredible, UAD wouldn't stand a chance. They would be a laughing stock compared to Scope

If S|C could put out a mixer like the following, they would blow all out of water !! Creamware had the right idea when they build BigMixer ergonomically, but things went backwards with STM IMHO.

Why ? Because in the real world hardware mixer, you dont 'click' on a channel, then tweak its settings on a box on the left.

All the settings are right there - above the channel fader. Even just a 16 channel version of this would be awesome. 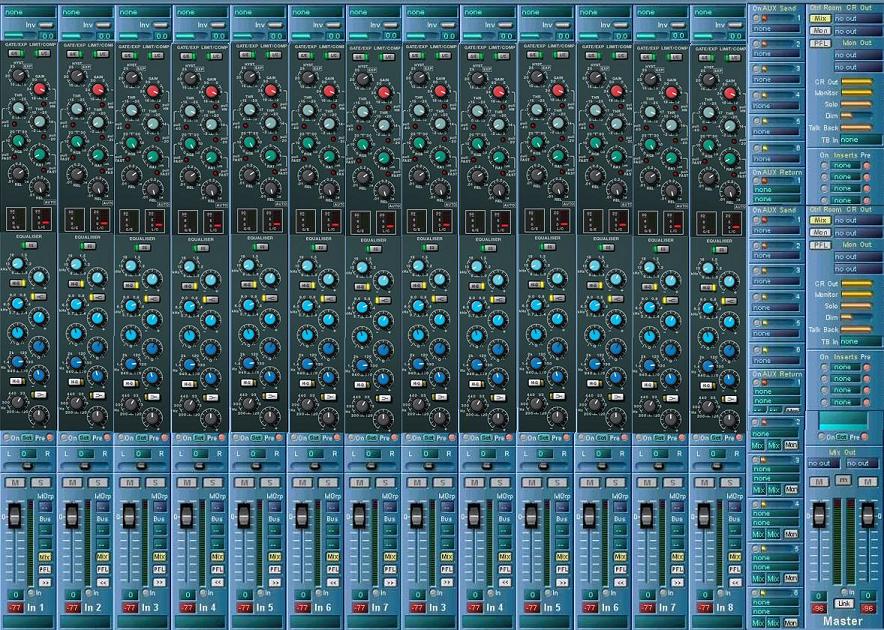 it was called the bigbugmixer back than guess why;
Top

I don't have to guess. Phase coherence. You think STM has it ? There's a reason I use the ScopeRise mixer.

What I'm posting here is a requirement, not a solution.
Top

talking about the bigblue;
not only phase i remember guiprobl. and and . .

stm should be ok;
ralf d. made them;
good vibes
Top

I suppose what I'm driving at here is the ergonomic aspect, not the implementation. BigMixer was designed on cards, but what's been tried on XITE ?

Some vibes arrive later then others...but they are all good.
Top

you put manually on 1 dsp and get trouble?
without using any effect of course;
Top

I never use manual DSP placement, not even for just synth poly - I use PCI for synths.

Question is whether it's possible to have a mixer with comp/eq all in line visually and not have to only see / adjust one selected Chanel at a time.

Obviously there would be implementation constraints - phase, DSP, which may limit the number of channels and / or sample rate ....but do those constraints mean it's not viable at all ?
Top

i love the STM2448 and 4896 ergonomics. i open the main mixer panel in one screen and the entire fader panel in another. it actually is like working on a large-frame hardware mixer for me.
Top

It also means though that if channels had everything in line then you wouldnt need the main mixer taking up a whole screen, so that screen would be freed up for something else.

Although maybe not as many channels because they would be wider.

But even then I have to double click on insert slots to open stuff which is Not the same as any real desk I've worked.

'Like having real hardware' is a Scope selling point isn't it ?

And with today's wider landscape style flat screens with higher res, this is one aspect that may be more viable now than it was at the time all these other Scope mixers were designed.

Its already been done in Native : 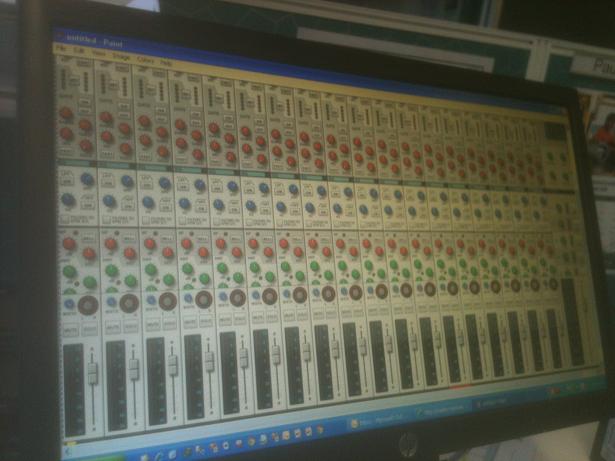 And this is only a 21" screen (18 stereo channels + master section) - imagine what could be displayed on 30" or more...oh, and another good thing about the Reason SSL design - the number of channels is dynamic... the way it is on the Scope micromixer but not on any of the larger ones.

Much harder to do on DSP than in Native it seems...
Top

Interesting...
Ah ! If Wolf mixers would work with Scope 6.0 ! I'd really like to use them. Exactly my need.
But there is no eq on channel -> takes less space...

Which mixer do you call Scoperise mixer, Dante ?

I call this one the ScopeRise mixer - its a variation on the XITED mixer : 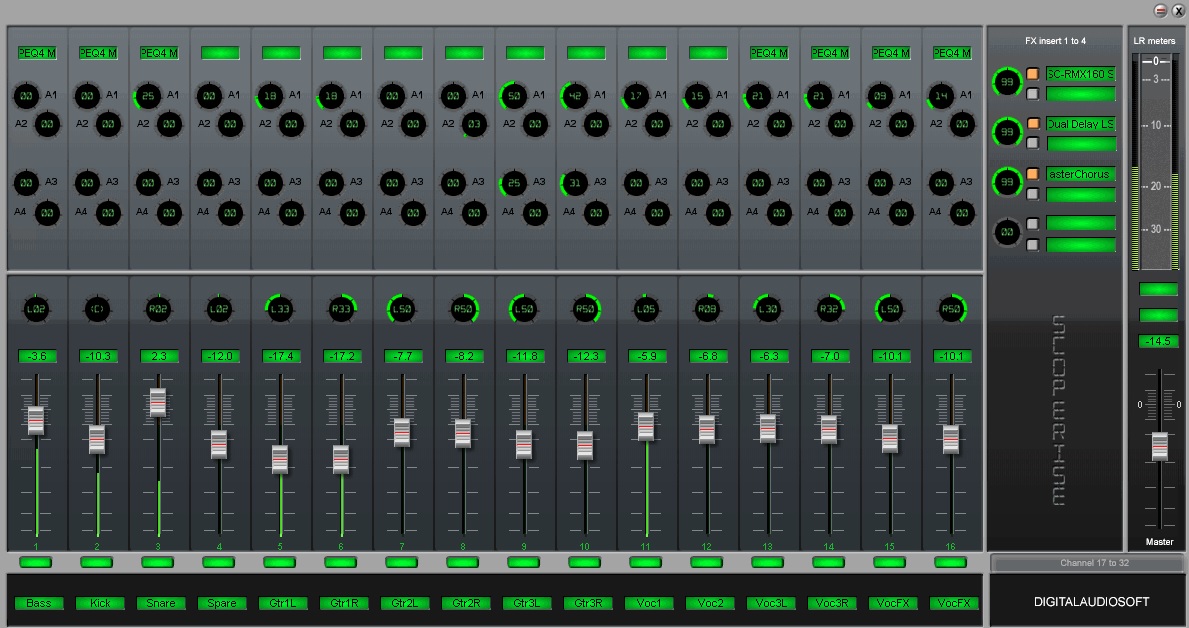 and aux pots with return pots

On STM, they could put eq & comp knobs on the 'channels' view but it would be much bigger on the screen.
The ideal function would be to have the choice to have eq & comp settings on the channels view.

I like to have the choice but more choice user has, more option there is to deal with and the application becomes complicated.

Is there a "light" mixer (dsp-wise) with stereo auxs and a layer of group channels anyone can recommend ?
(There is cwmixer which is great but pretty dsp heavy hogs up my current 15dsp setup - it gets too large with groups and send functioning ...)

I am currently usinf STM2448 for ASIO summing and a dynamic mixer for Scope synths which feeds into the STM (first direct , and then after sampling - from the ASIO sources)
Top

Dante !
I'm searching for the ScopeRise mixer everywhere... At DAS site, at ScopeRise, on my HD, I found this : 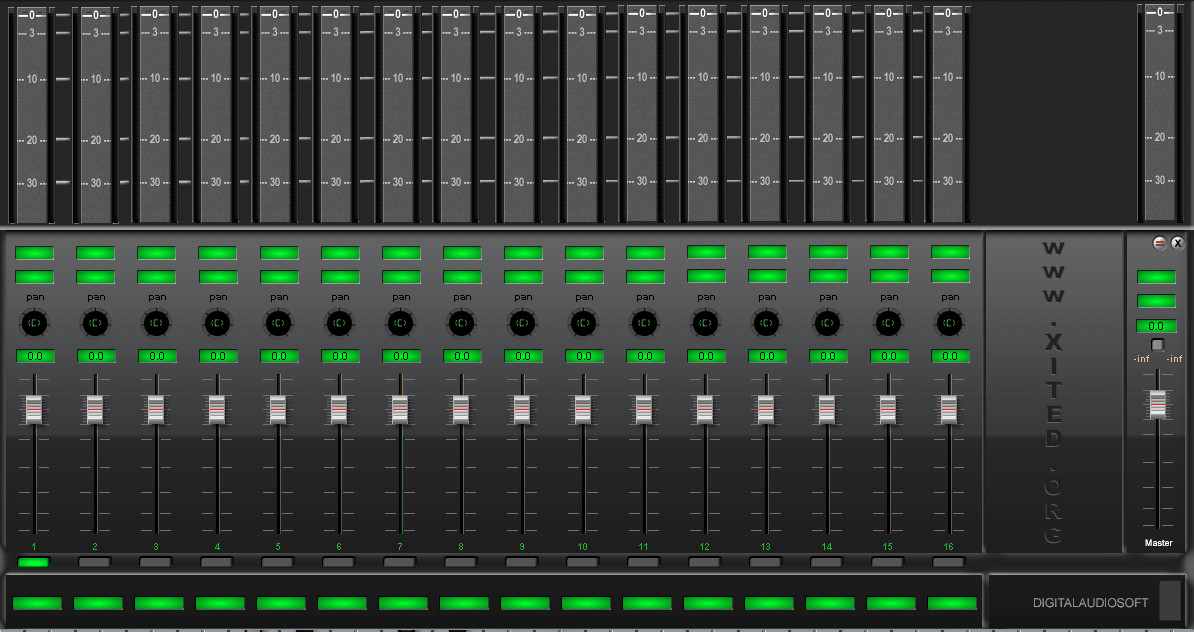 But nowhere the ScopeRise mixer you're showing !
I'd like to try it : it has 4 aux. which are missing on the one I have !

Where can I find it ?

I don't find anymore the DAS download page either ! Where is it gone ?

Dante ! Haven't you seen this ancient thread coming up ?

It's not available generally - you can ask Eric from DAS though, since he built it for me as a custom request.
Top

Thanks for the info. In fact, it interrest me a lot since it has 4 aux & 32 channels. I imagine it's less dsp eater than STM...

Its light on DSP - 32 mono channels and no FX until you add them.
Top

Does it have stereo auxs ?