Greetings Medhi. I have been exploring the Modular Mixer for a short time trying to incorporate it's unique abilities into my setup.
What I am trying to do: Minimize DSP usage on my startup project and maximize flexibility for effects routing.
This has been a slow process but i am slowly starting to learn what each module is intended for.
My setup is fairly simple with really only 3 stereo ADAT inputs used at a time mostly.

Some thoughts and obsevations:

-I probably will still use the STM2448 mixer simply because it seems to be "free" that is, there seems to be no cost of DSP's, at least that is what is showing on my DSP load. (I use the Scope synths a lot and try to leave as much resources free for those)
-So what I am trying to do with the Modular Mixer is use these modules for AUX effects by loading the effects on the main project window for DSP efficiency. (Not sure if I'm crazy but the effects seem to sound better in the project window rather than an insert and I've even taken steps to try and make sure it is not just a blend or level setting that is the difference.....hmm)

Any thoughts, suggestions, tips would be greatly appreciated from anyone.

I don't know the sts well, but i remember that it loads with a minimal dsp usage and then it goes up as more channels are active, it is dynamic. You need to measure it at the end of your project because, at the begining of the project, as long as there is no sound going through all the channels, you are right, it doesn't take much. if you begin to activate the effects etc, it will use more and more.

On the contrary, the Modular Mixers, just like all SpaceF mixers, load "full-on" from the start. what is loaded is actually directly useable.
And it doesn't take much neither, or at least it would be hard to make it lighter than it is already (unless removing functions such as solo/mute, which are already very light).

The Aux routing seems to be mono on the STM ? On spaceF mixers it is stereo, so for ex, 4 aux is in fact same as 8 "stm aux sends", the 7 bus version is 14 channels. The DSP usage comparison is biased from the start because of the stereo vs mono routing.

The Master Bus of Modular Mixers is also different than the bus/master of the stm. I beleive midi CC is more reliable on Modular MIxer?


About the effect sounding better in the project rather than in inserts, it is possible, i haven't really made comparisons but it is possible because in the project is more direct (in an insert, there is invisible routing that allow the effects to appear inside another device, may be it introduces slight phase issues?).

The only thing i can say is that using inserts is very advisable in scope/xite (it sounds great anyway!). I personnally mostly use inserts. I mix for other people sometimes, they never complained about what they heard, on the contrary

--> May be you could try using a Router+MasterBus - without channel modules. You set levels with the first row of potis (bus 1 ). That way you can have a large mixer with 7 stereo bus (1 mix+6 aux/bus) and keep the effects in the Routing window. You eliminate the part of the mixer that contains insert loaders. And and if you need a few inserts, load just what you need (a stock effect rack or a 4 channel module from Mod Mixer v2).
plug-ins for scope
SpaceF website
SC website
Top

Well I would much rather use your mixers than the STM. It is an amazing group of mixers providing almost unlimited flexibility!!!
And I must congradulate you on that monumental feat.
What I am trying to do is replace the STM2448 mixer with only using your devices (and here's the caveat) with a minimal DSP load for my startup.
As you can see from my first pic I am only utilizing a few inputs into the STM2448 and I use maybe 2 or 3 more with Scope synths and usually only 1 ASIO from the DAW. I'm thinking I might just be able to go directly into the MB503FX? Will have to see how it works out.

As far as the STM2448 DSP load; The first PIC I have loaded my usual startup and all of the DSP's show minimal usage.

The second PIC I loaded and connected , well just about anything and everything I could think of and it seems like there is really no change in DSP usage which also matches how I have perceived the performance on the Xite when loading high polyphony on synths and delays, reverbs etc.
This is in no way critical to you or even remotely a complaint. I point this out simply because I am curious to know how this is possible since it appears no other developer on Scope can produce a mixer or router with this kind of DSP efficiency? 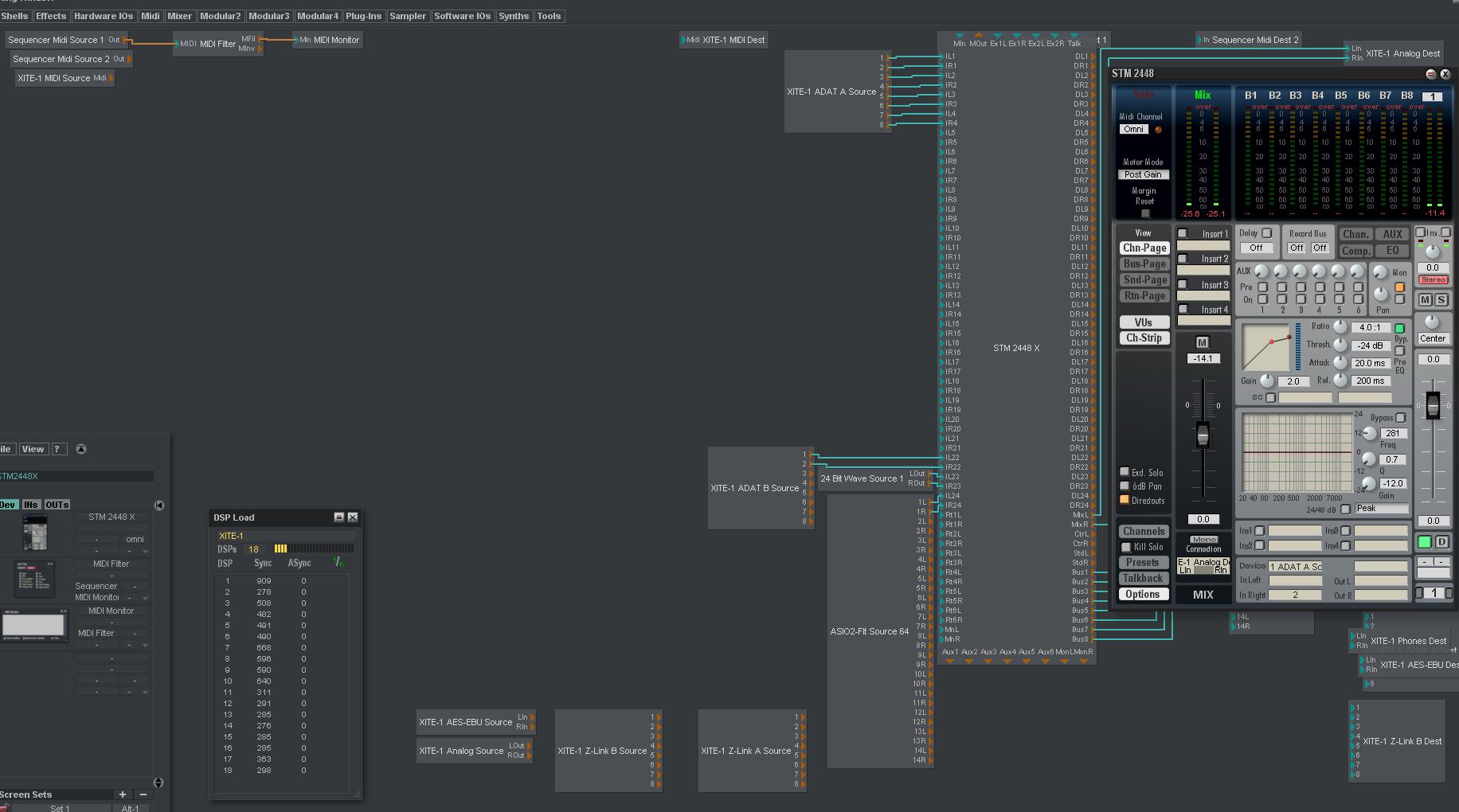 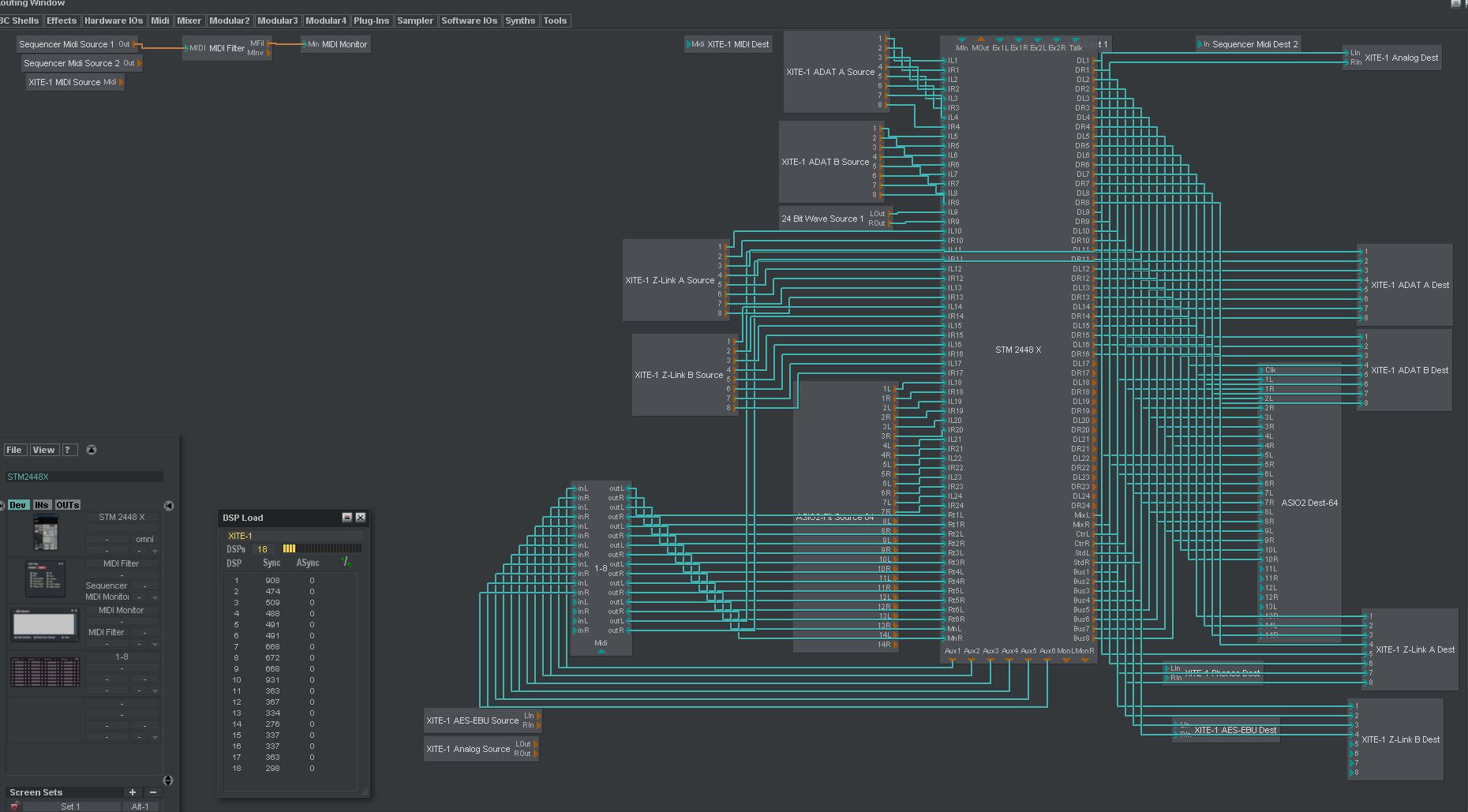 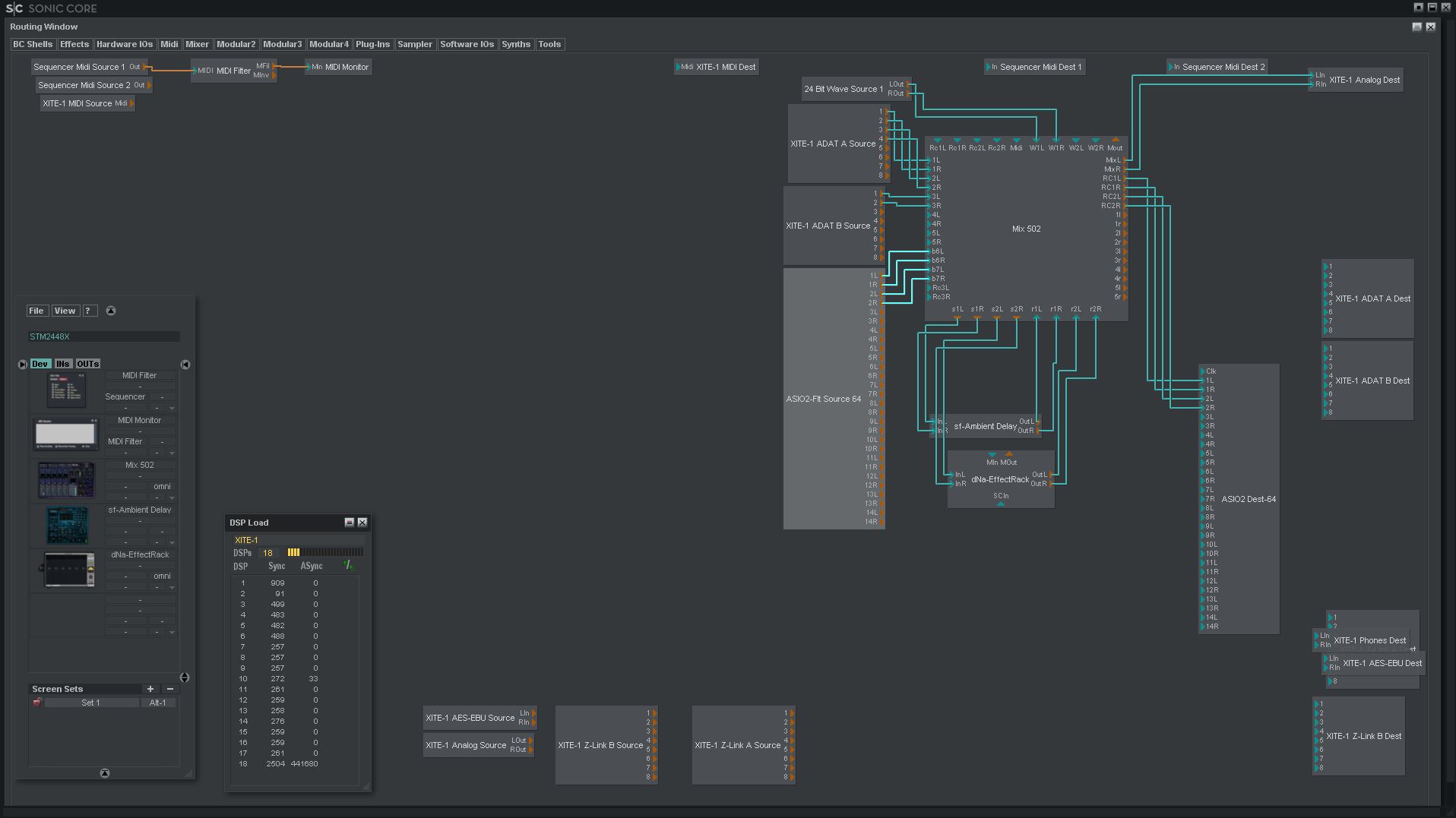