- I will change the aux send to post only. Pre is really cool but difficult to manage. Any one doesn't agree? let me know.
- I will try add a few parameters to the Hats and VCO 2021... next week (parameter to add more metal to the Hats, and more sounds in the 2021 osc ). However, I will only do it if DSP resources stay more or less the same (I am trying to add "metal" to the Hats, ie TR style hats, which is resource hungry as it uses a lot of oscillators just for this... so I will see if it is worth it (not built yet).
- parameters to allow midi control of the triggers/mod selectors (like Aquarius "Options" page).


I can only use Midi CCs from the Undefined list below, because that's the only ones that will *not* be renamed by Studio One (studio one renames Midi CCs according to official midi names, which is super confusing, as for example , your CC 18 will become "general purpose 3" making it hard to know what does what once you go into editing your midid automation.

-> I am finalizing a "project sync" device that will dispatch BPM and sync signals to use in more than one device such as LogiQ, KrOn or Echo etc.

->REASON: using Midi CCs "live" is no problem (see my videos), but after recording in Studio One V4 there is a huge problem of "ghost" signals sent with wrong notes-on. This obliges to clean the Midi CC so they don't happen at the same time as the Midi CC = pain in the bottom. It looks like a bug of Studio One V4 (may be solved in V5) but this could affect other sequencers. At the same time, I recall similar behaviours in noah long time ago, when the sequencer would go wild for no apparent reason, well, that must be it.
-> I do not have another sequencer than studio one v4 (and will not upgrade to v5 anytime soon), and no hardware sequencer to verify that it is a studio one error or a more general bug, so i have made that device.

-> The device completely solves the issue, in addition to be the main tempo for several devices which is something i've been thinking about making for years....
-> I added 3 "LG" outputs, so you could synch a quad modulators easily, ie, allows the device to receive more than 1 note-on gate at the same time, without the need to route audio signals or use Midi CCs.

-> For the moment it is only for Notes-On and I do not think I will make a "self-sync" like in LogiQ because I have not noticed any issue when the devices and Midi CCs are used without notes-on messages. Also because using several self-sync requires an self-self-sync to resynch all the self-syncs (you are following me right?

-> Also , I am *not* adding manual tempo to the device for the moment, because it's another type of signal and seems difficult to implement at project level, at least not immediately because it requires a lot of test and trials and errors, and I want to make this one available "ASAP" and get rid of all those studio one/*scope issues which are workflow killers.

- > The new device is best used on its own midi driver, in order to completely seperate the re-sync messages and the midi Ccs etc. so the 2 information never overlap. Bye Bye midi overflows, hello awesomely precise sync

There are 3 outputs mainly to be able to use a different sync per device,, or to better sync the quad modulators which can be retriggered independantly from other sequencers.

-> I have been testing this for 3 days and all is very solid even when using intense Midi CCs automations. The devices never go out of sync, all signals are treated completely separetely, and all is much better like that. A huge improvement, and also great to be able to set tempo once for all in a single device.

see you in a couple of days.

Breakthrough in Aquarius.
- I changed the envelopes of almost all section s to get the D/R Slope which opens new possibilities.
- Additonnally I've implemented a trick to change the curves of the envelopes and get fast enevelopes that are usually not possible with Scope. I beleive it is the same trick as in Kick Me from Adern, but with the Carbon Kick engine. I also added this trick to the Hats and Osc 2021. It did not sound fantastic on the other sections, and so we now have a great drum box with response curves that can evoke the TR 909 (on hats for example).

I did not change the Hats oscillators: if you need metalic sound, just load a phaser with a depth of 0 (or near zero) and adjust the offset to make the "metal" darker or brighter. No need for more than this

VIDEO---> https://www.youtube.com/watch?v=7CLMZvg6jEA
not necessarily obvious on the kick because oft he mp3 format, but you should hear a massive difference in hats and snares. All these are sounds not previously achievable, and you keep the old presets too.
plug-ins for scope
SpaceF website
SC website
Top

Sorry I am late, but I was "double-checking" it.
The update is available. You should find it in your shop download, and in the download page as well, with information.
https://spacef-devices.com/sf-downloads/

It's a repack, with presets etc. I will make an audio demo this evening. Check out the "Carbon Fat Punch" crossfader...
Just now, gonna enjoy the sun a bit 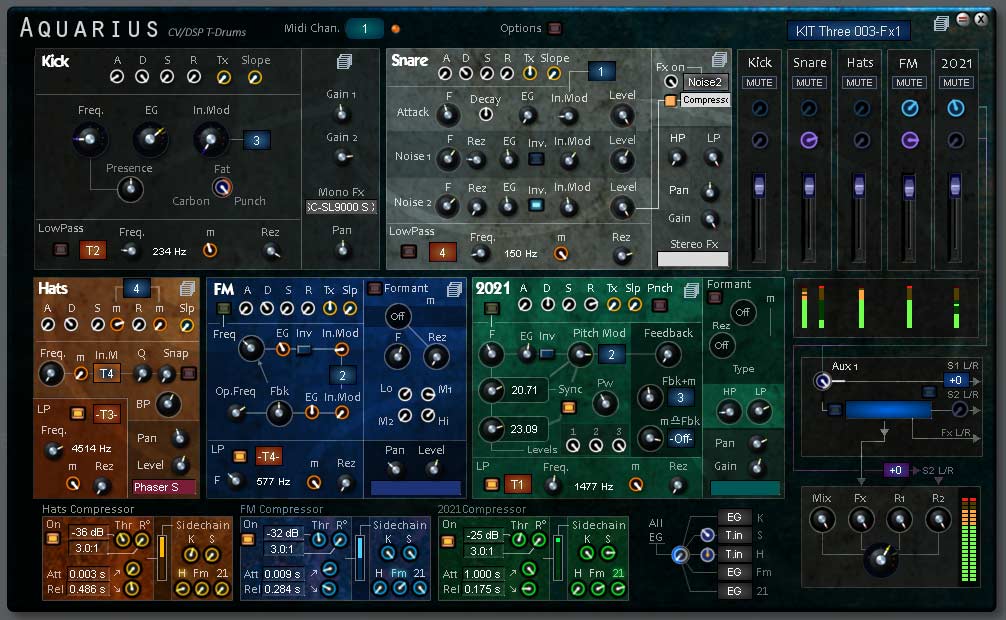 That's great. Thanks for the continued updates to this. What a great set of devices you have created.
Top

Hi Medhi
Small issue with Aquarius.
On load I get the following error message. 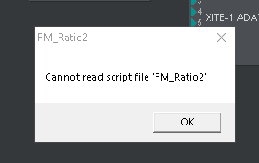 It loads and runs ok, but I may be missing a DLL or the like?
btw, the error reads "cannot read script file 'FM_Ratio2'"
regards
maus
Top

Hi Mausmuso,
Thanks for the feedback.
I had this error once but not anymore for some reason.
I will check this.
Thanks:
Mehdi

PS: i don't think it is a missing dsp or something like that, it's more some kind of memory bottleneck, that may happen under certain circumstances. I say this because it happened once only, but not since then. I think it happened in a dsp overload situation (large project, assigning devs to dsps etc). I have been running a project in Scope/Xite fine without errors in new projects or default project. Also, it doesn't happen anymore in SDK. I may still try to see what could be causing this.
plug-ins for scope
SpaceF website
SC website
Top

I am going to add another drumbox, it is a variation of Aquarius that can replicate old school sounds. not very original, but i "needed" it

i'll probably do a version of aquarius that can add those sounds... using a few more dsp resources (the metal hats like TR use 6 oscillators....).
I guess only cloning famous sequences will allow to know if it is accurate (i am not looking for accuracy, i don't change aquarius Kick and Snare...and it is editable so it goes beyond a "clone" (which i might be incapable to produce because i would not use it a lot).
---> sound preview : https://www.youtube.com/watch?v=h1ozC3tH0vk

one day i will succeed in finishing a track instead of making new devs....