an update is available
check the news on https://spacef-devices.com/ 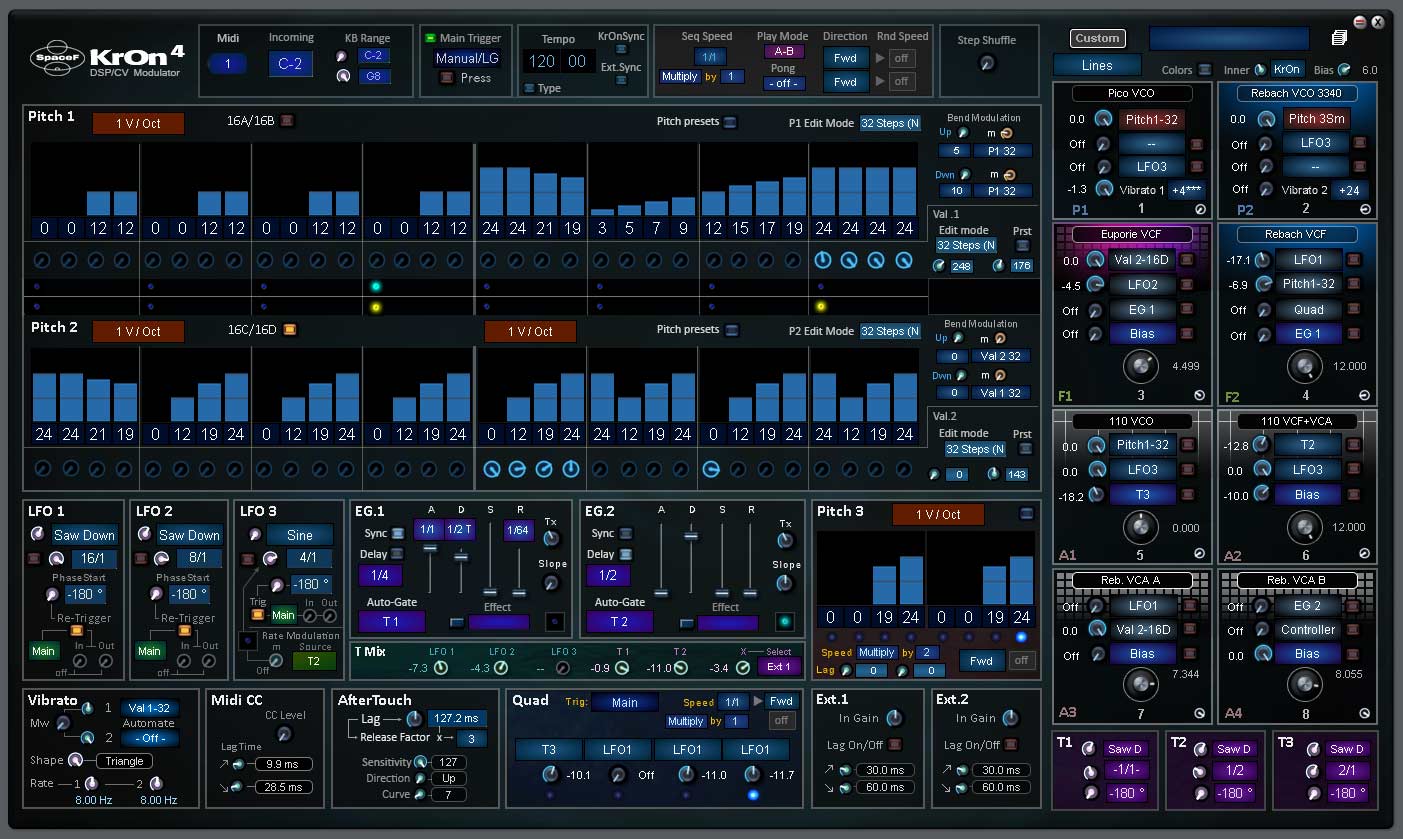 An update to the update is available.
There is nothing new except that I removed a tag "LoadOn Same DSP" that seems to cause loading issues in PCI setups.

Here is an explanation, let me know if you don't understand it, it's not always easy to explain this kind of things

- This version of KrOn does not have a tag "LoadOnSame DSP" that the other version has.
- The "Load On Same DSP" is a device tag for Scope that allows devices to be loaded... on the same DSP. It was introduced in KrOn 4 only.
- As KrOn is quite large, this tag may cause loading issues on Scope PCI (or multicard setups) , ie, not being able to load KrOn 4 because too big (Scope cannot find a way to load KrOn on the same DSP, nor is it able to determine which section should be on this or that dsp). it ends up with a message saying that you do not have enough resources to load the device.... bummer.

So here is a version without this tag, that will be easily loadable in Scope PCI, just like KrOn 3 (which did not have that "sameDSP" tag).

The user who reported this to me has a setup with 9 DSPs.

On Xite:
-----------
I added the "Load On SameDSP" tag on Xite when I had issue making connections between devices in a very large project where i was building KrOn4+Aquarius+LogiQ+Echo+mixers and synths etc..

I found that the tag allowed me connect KrOn more easily, but it may be a coincidence, because I did not save and reload a project when I had this issue. But I kept it like that because it worked fine days after days, and I actually forgot about it.... until a user told me he could not load it in Scope, while KrOn 3 was working fine.

Using the other version is fine too (the one dated 2021-02-11 - that you already have) and by looking at the DSP meter, you will note that KrOn 4 is actually concentrated inside 1 DSP of XIte. This means that the other DSP will be 100% free and all their connections will be available for other devices (in theory at least

Personally I used the 'load on same dsp" version since I made it, without any noticeable issue, and that's why I released it. But apparently, it is not good for PCI setups.

So, on Xite, use either version, the one that works for you - or that makes your life easier - in a particular project. Do not overthink it. Just use one or the other version: if you run into connection issues and feel stuck, try to see if loading the other version makes things easier.

When I will repack the krOn package with the other devices, I will make folders that will make it clearer which version is which.
I will probably use this new version "b" as default, and make a folder "OnSameDSP" to provide the alternate 'OnSameDSP" version for Xite.

If everything was working fine, for you, just continue using the version that you are using but keep in mind that an alternate version exists that will change the way the device is loaded and the number of connection between DSP, so it can be helpful depending on particular projects.

Let me know if all this is confusing or helpful

spacef wrote: ↑Mon Feb 08, 2021 12:23 am
I am also working on a standalone device to sync all project devices (KrOn and other spacef stuff), which will be done only once the rest is released (and it will require updates to include the adequate "receivers" inside those devices. For KrOn, it will include a "main gate" and a gate for the quad. I intend to add a CV sync for CV gear (you can do it already but that will just be a dedicated output).

Could this include sending midi clock to other Scope devices in the project window that have midi external clock options?
Top

Unfortuntaley it does not work with midi yet. It is a frequency signal that is sent out. It is a sync signal and not a midi one, unfortunately.
plug-ins for scope
SpaceF website
SC website
Top

That's ok I just thought maybe there could be a MTC out as well but that is probably way more complicated to achieve.
I was trying to clock sync Interpole as a send/return with Aquarius.
After trying MTC from the DAW the only Scope device I can seem to sync is Mattomat.
Everything else shows 220 initially.
Not sure if that was a Scope 7 thing? I can't remember.
Top

I think it has always been difficult to use the external midi sync. For me it has worked with a hardware equipment, but not a daw (it fluctuates).
I had a yamaha mini drum thing years ago (like 2003/2004) . It could send midi clock, and the ext midi sync in scope was much more stable and useable that way.
So I think ext-sync would work with any hardware. Someone just need to make a tempo rack with a big knob and big lcd, that would be the master tempo of the studio and scope+daw through midi. Not sure if it would be very practical though.

I learned to do it in other ways because of this. It does not mean there is no way to achieve it.
plug-ins for scope
SpaceF website
SC website
Top

What is Kron 4 (c)?
http://www.mutationaudio.com

normally it loads with the "note-on" sync by default.
Later today i will upload a revision of the midi-to-note on, witrh revised midi channels and keyboard range.....
bbl
plug-ins for scope
SpaceF website
SC website
Top

Midi to CV has been updated at last.
The midi is completely revised and so it brings multitimbrality to KrOn and other sequencers. Multitibrality was possible by using different midi source drivers, but now it can be on the same midi seq source driver.

I do not update the freeware version because it is still useable with KrOn only (standalone modes not revised yet, so still very limited to a few notes).
But it is for everyone (no key inside)
--> https://spacef-devices.com/sf-downloads/ 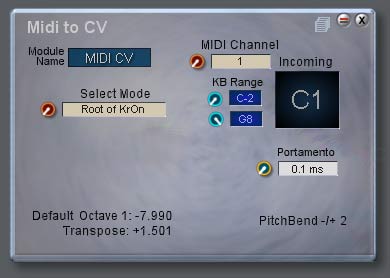