place the rack on it's back onto this thing after you take the lid off:
http://www.campingworld.com/shopping/it ... zer/101686

it's so crazy it makes me want to make my own...
Top

and fill the space left with a six-pack
Top

Here's what I use on the 1U.
Still uses the same Supermicro 20mm trio of fans but I can make them quiter when I am in my crib.
Full tilt they run @ 22k rpm.
Bastards sound like a Hoover Vacuum cleaner.
But now they get water looped and the DAWg will hunt.... 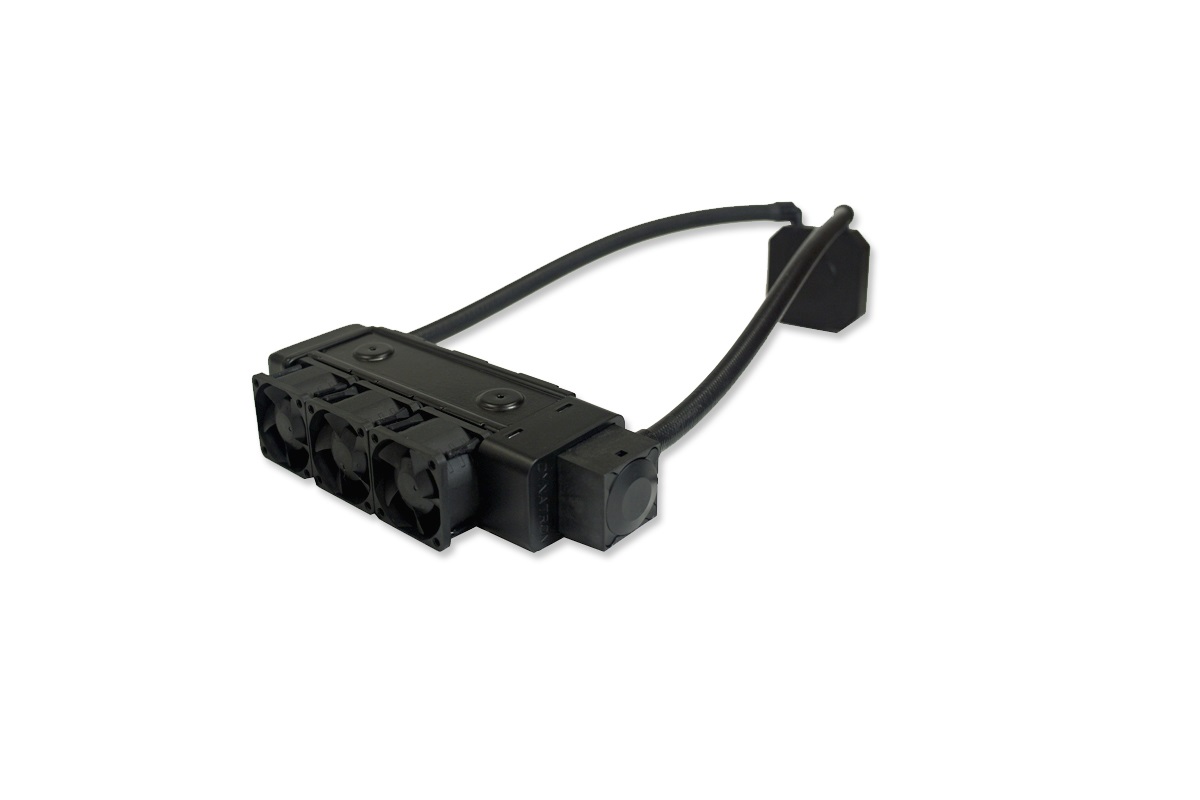 dawman wrote:
Im actually quite happy with headroom on the Z97/i7 4790k CPUs.
Just wanted to make sure Scope could move ahead using Windows 10 and Z270s.

I decided to go with the i7 4790k this time around for my chosen upgrade as well. The specs and your reviews convince me it's a beast. I just ordered a custom build with it from Magic Micro and should get it in about a week or so after they custom build it for me. I chose for Motherboard the MSI Z97A-SLI KRAIT 1150 and hope it works properly. I decided on i7 4790k instead of the newer i7 7740X primarily cause there's less of incompatibility risks with both software and hardware and I don't want to be a ginni pig this time around, plus the i7 4790k has a lower TDP at only 88W verses 112W. The newer i7 7740X can't run older versions of Windows O/S only version 10 and some of my plugins and programs were designed for older Windows 7/8 like my DVD-Audio Authoring software and my Lightscribe Duplicator software. They might can run on newer versions of Windows O/S but newer is not supported and why take that chance I ask? Plus the hardware motherboards of 7740X have not been tested either with XITE-1. If there was only a hardware risk I would have taken a chance with the newer i7 7740X but there's software risk as well, plus most DAW builders only install 64bit O/S with their newer processors and I want 32bit installed.

Magic Micro was the only DAW builders I could find who sell custom built systems with older computer parts wich I wanted. They still have i7 4790K processor and Windows 7 32bit. I initially wanted to wait one more year before upgrading computers to get the most powerfullest I can once I had my current system for a full 10 years but this i7 4790K still runs at 4 GHZ and is a great compromise/alternative and it still has been close to 9 years since my last upgrade. If I have no compatibility problems I'm sure i'll be happy with this 4790k choice and it still should last me a long time. I'll post a list of all the parts I chose in the Configuration thread once I get the new system. Thanks for all your reviews on the 4790K!
Top

If possible spare RAM and motherboard.
CPU will last for years, the rest is rare before long.
I've actually got 2 x spares built and running, both 4U.
A Spare ASRock H97m and 64GBs DDR3.

dawman wrote:If possible spare RAM and motherboard.
CPU will last for years, the rest is rare before long.
I've actually got 2 x spares built and running, both 4U.
A Spare ASRock H97m and 64GBs DDR3.

Yea that is true. I'll probably start getting some extra computer parts for future repaires/builds in a few months. I'll have to wait till I recover better financially from this new system build, the upcoming Holidays spending, and imminent software upgrades that come with the October Music Fest. All those obligations I'm sure will keep me broke or near broke financially till the beginning of next year at least, but I definitely see the need for some spare computer parts for this new i7 4790k system build I ordered.

Actually it looks like certain parts (Motherboards, the Processor itself, and Windows 7 32bit) are already starting to dry-up/become harder to find out here. Some of the scarcity that's progressing appears to be artificially induced like with older versions of Windows and with the 32bit O/S platforms cause I fail to see why newer i7 Processors won't support Windows 7/8 or why most Computer-Builders refuse to sell or install 32bit O/S's nor older versions 7 and 8 of Windows. Intel, Microsoft, Apple and some Plugin-Developers seem to be artificially forcing us to newer versions of Windows and/or to only 64bit systems (It is to the consumers benefit that new Processors can have older versions of Windows on it for many reasons and this has always been possible till now). I try to avoide planned-obselences-moves by companies and managed to do so again this time around. I won't let some greedy company twist my arm and artificially force me into unnecessary software and hardware upgrades due to their manufactured problems, especially when such upgrades do more harm than good!


The i7 4790k platform seems to be a VERY good alternative to all the supposedly latest-and-greatest and new tech that's just keeping the planned-obsolence-model going. Hopefully this i7 4790k and Windows 7 32bit system last me very long and serve me well. I will be skipping Windows 10 and may try version 11 or later but at my own time and when it benefits me not when it benefits some corporation nor on their time!

why no win7/8 support?
because win10 is the biggest step into dumb terminals that are 100% cloud based. it's a new world, and it's (not very) brave. soon, you won't own much, not even your own work(because the network owner owns what's on the network). welcome to client-ville over ownership.

the new processors COULD support win7/8, but then how can you be convinced to move forward with the grand plan?
Top

That's exactly why I stay where I am.
I do have an HTPC with Windows 10 and some streaming boxes.
I do wish to become indoctrinated, just not on PCs making my money.
I just bought a pair of i7 5775C CPUs and another 128GBs of DDR3.
Waiting for H97m motherboards from Taiwan to get shipped to Amazon warehouses.

AMD forced Intel to release 6 years of new CPUs and chipsets in 1 year.
What a goat fuck....

I'm still hoping AMD quad with GPU on die will work for XITE-1 in 2018.
If not, I'm covered.
But AMD CPU Cache is always bigger than Intels, which is where Native FX instances are more numerous.

garyb wrote:why no win7/8 support?
because win10 is the biggest step into dumb terminals that are 100% cloud based. it's a new world, and it's (not very) brave. soon, you won't own much, not even your own work(because the network owner owns what's on the network). welcome to client-ville over ownership.

the new processors COULD support win7/8, but then how can you be convinced to move forward with the grand plan?

That makes sense and definitely clears things up and explains what's going on. I knew the move to not allow latest computers to install older Operating Systems was a move more about money, power and control i just did'nt know the exact goal/grand-plan. I do see many companies going with Cloud-Subscriptions wich proves to me this is the way the internet-based industries want to go.This is stupidity if consumers allow for this type of paradigm change to fully take place (actually it should'nt have gotten this far).

Honestly i don't believe it can fully work in the Audio industry where plugin-developers are not like Adobe who are giants that have their industry locked-up with very little competition. Adobe can get away with Cloud-Subscriptions but the Audio industry is extremely crowded with many desparate developers looking to make a buck anyway they can and thus many of them will sell their products without subscriptions just to get the anti-cloud demograpgics and to ultimately survive. It's too difficult to survive in the Audio world, many big and little companies were forced to abandon the dongle in the Audio industry and go either completely without or offer virtual-dongle as well. Waves, IK Multimedia, Brainworx, etc all were forced to give up the dongle cause the Audio world won't tolerate draconian methods too well. The Audio industry is so small and saturated with competition that if a company turn-off any consumers it can and has hurt their business. There is even alternatives to even Native itself with hardware and dsp-cards.

There are some Native companies in Audio that do Cloud-Subscriptions such as Roland, Eventide, etc so it is defifinitely spreading in Audio, but i think it's impossible for Cloud to completely or even seriously at all dominate our Audio industry. It can and probably will dominate some parts of our industry like the DAW portion but not with plugins IMV. VST Plugins have waaaay too many options due to endless competition, but DAWs can get away with it and Subscriptions are slowly making its way threw the DAW world.

There are a lot of foolish consumers that very well may allow Cloud services to dominate more and more industries, sadly. Many consumers just want instant-gratification and don't see the importance of ownership or know the pride from it. I never buy dongled or virtual-dongled products and generally don't buy those that need internet-activation (there are a few exceptions) and never buy those that need Cloud Subscriptions simply cause i love ownership and the ability to re-sale if hardtimes ever come my way. Hopefully the consumers in the industries with Cloud get smarter at some point before the world becomes an even gloomier and uglier place.
Top

I've had my i7 4790k system for about a week now and I finally installed enough software to do some initial tests. So far the MSI Z97A-SLI KRAIT Motherboard is a winner. I intitially thought it was incompatible with SCOPE XITE-1 but this was a false-alarm. When I launched SCOPE then Sonar I then launched a old project in Sonar and immediatly started getting error messages saying "Audio devices can't be opened", wich appeared to be the dreaded Asio problem SCOPE is having with newer motherboard chipsets. I tried tweaking and re-configuring Sonar but had no success cause the error message continued. I then launched Propellerheads Reason (project at 96khz) and the project played back with no problems while utilizing Asio. So I then went back to Sonar and tried another older project I had and it worked just fine. So when I used a different older project Sonar worked wich means the first project I tried was either corrupt or I somehow had it mis-configured and couldn't figure out how to correct it.

All-in-all SCOPE XITE-1 seems to be working fine with this motherboard. I'm glad its working cause I don't have the time or energy to solve a major incompatibility issue and don't want to spend more money on another motherboard. i7 4790k seems pretty powerfull and Socket 1150 seems a great option and alternative for SCOPER's. I won't be doing all the benchmarks I did with my last computer build cause I don't have the time or energy but I will do a very small amount more of testing for power and compatibility with SCOPE. So far MSI Z97A-SLI KRAIT is working fine with SCOPE but I will test a little more.

I really hate re-installing Native software on new systems and Windows re-installations. One of the best things about SCOPE is all I need to do is save my SCOPE folder to a dvd disc and then everytime I reinstall Windows O/S I simply copy the SCOPE folder from my disc to the C:drive and then run the installer and all my SCOPE plugins (wich are several hundred) are installed instantly and simultaneously. No need to install SCOPE plugins individually or deal with copy-protection schemes that are a hassle. Native software takes me many days to re-install even tho I don't own a lot of Native plugins. Long install process makes me want to own even less Native software.
Top
Post Reply
52 posts