External (non-Scope) tools of our trade

External (non-Scope) tools of our trade

This thread will be about specific tools that go beyond the norm in helping us accomplish tasks in music production & recording, sound design, post production & scoring. I often craft extensive posts elsewhere and would like to preserve that information so it can be shared with all, so you Scope mavens will be the primary beneficiaries of this, and I encourage you to do so in return. TIme permitting, I will integrate useful information into the parent post(s) to make the info easy to find.

What I do NOT want to do is create a replication of the ancient 'web directory' or replicate what sites like KVR & etc do. Rather, these should be things that aren't in common use at the time we post them or offer novel usages, simplify modern workflows or even just offer what was once boutique pricing for a task at a low or free price point.

Let's start where most of us end, with a discussion on the tools used to deliver our material to the platforms that are distributing and streaming to our audiences today....

Most of the larger streaming & online music distribution platforms have finally brought relief to listeners from levels jumping radically track to track through the widespread adoption of a variety of normalization algorithms. Thankfully, rather than just compressing & limiting based normalization as was used in the broadcast industries, scan & index systems like ReplayGain (RG) have come to the fore for many of these platforms. You might be familiar with this through the open source community (hydrogenaudio) and tools such as Foobar2000 and other tools that target the home audiophile & digital album collectors alike.

For instance Youtube Music apparently has chosen to use the BS.1770 standard which is also now known as LUFS [also known by the older non-standard term LKFS pioneered by Bob Katz]. Here's a good breakdown on edmprod.com that breaks this down with software tools that are easily accessible to our DAW workflows: LUFS: How To Measure Your Track’s Loudness in Mastering (I will also link some of these below to highlight them for fellow Scopers).

Note those of you who come from a traditional broadcast background might find the following inquiry to be more digestible: Using the ITU BS.1770 and CBS Loudness Meters To Measure Loudness Controller Performance

When it comes to understanding how your material will translate to these platforms, we also have some tools that exist specifically to audition these changes in-place so we can make an evaluation of the effects of our workflow on the final result directly in the DAW or via an exported bounce. For instance Plugin-Allinace has ADPTR AUDIO Streamliner

And there are even free tools like the following site which says it helps you "Discover your music's Loudness Penalty score, for free": https://www.loudnesspenalty.com/

Here are some additional articles & quotes that can help clarify this issue further.

Whenever music gets distributed to Spotify, the audio is stored, cataloged, and then encoded with information with a program known as ReplayGain. This program either turns up or down the volume of the track to the default -14 LUFS, depending on how loud the master is in comparison to that benchmark.

Mastering audio for Soundcloud, iTunes, Spotify, Amazon Music and Youtube
[This older article from 2016 is included for chronological perspective. I'm not sure Spotify was using RG (Replay Gain) yet back then.]

As I am in the process of collecting & compiling this information here, this post will change and if these articles don't agree just understand that in the end we're creating standards based on human interpretations, tastes and opinions and the tools & science used simply support the current state of our ever-changing art in the music industry.

According to the middle article below, Amazon, Tidal and Youtube all use the BS.1770 [ITU-1770] standard. Testing of the same track as it appears on Amazon HD (lossless) and Tidal Lossless (with and without the individual player's normalization turned on) seems to show that both Amazon and Tidal use the same non-compression/limiting, indexed normalization. And their normalization algo's produced virtually identical results when tested from by a number of dynamic measures. (Spotify apparently currently uses RG but have committed to converting to BS.1770 in the future.) As expected, the internal dynamics [dynamic contour, if one will] remained effectively identical. When adjusted for level, the normalized tracks were indistinguishable from standard playback in ABX testing using blind-testing ABX tools.

ADDENDUM -- the second article linked above (3 Myths, Oct 2019) includes this specific info on platforms and their chosen normalization:

To muddy the waters further, there’s nothing to prevent any of the streaming services from changing either their reference level, normalization method, or both down the road. In fact, Spotify has done this in the past. A few years ago they lowered their reference level by 3 dB. They have also stated that in the future they plan to use BS.1770, likely with a reference level of -14 LUFS integrated, but of course, that’s subject to change, and when this switch will take place is anybody’s guess.

Targeting Mastering Loudness for Streaming (LUFS, Spotify, YouTube)-Why NOT to do it.
Top

Re: External (non-Scope) tools of the trade

Placeholder for later use
Top

Re: External (non-Scope) tools of the trade

Placeholder for later use
Top

I'm not sure if this fits this topic but.... FWIW

As you will see from the page, you drop an audio file on it and a few seconds later you can choose from four different variations:

I have gotten some pretty good results with bass boost and CD, Clarity seems rather harsh. It seems like they are using some type of mastering chain to pass the file through and then render and export to your format of choice.

It doesn't work on everything but I have gotten some surprisingly nice results, even with masters I thought were done via Cakewalk on top of Scope (even through Optimaster).
"I’ve come to the conclusion that synths are like potatoes, they’re no good raw—you’ve got to cook ‘em, and I cooked these sounds for months before I got them to the point where they sounded musical to me." Lyle Mays
Top

The idea is to collect some solid information here that can be used to step up our game, and note I will be adding other software & hardware beyond just the mastering discussion we have started with.

So this fits in just fine. While the auto-master tools won't appeal to those used to a specific engineer's output (including your own) they are a workflow enhancement for those who may not have the tools or business connections---or just work in post and want to prioritize speed & efficiency. I can imagine if I were for example churning out licensable music for the various services that offer such things using a tool like that would be worthwhile if the results were usable.
Top

Here's a couple of goodies that I use for my B-3 setup in the studio. The Roland MKB-300 is a beast I got in 1986, new, that weighs a ton so it stays in the studio. The keyboard has a very Hammond feel. The mod wheel has adjustable depth and rise time which is fantastic for any kind of expressive instrument, like horns, strings, guitar, woodwinds, etc., and I have never seen it on any other keyboard except the 88 key version. It needs two LR-44 batteries to retain the memory, which is a drag but the battery low led gives you some time to replace them. I keep a dozen or two around. Basically, it has been on since 1986!

I store presets for the drawbars in banks and programs so I can switch on the fly. I set it up with the two manuals split in the VST or B-2003 because when the MKB-300 is in split mode when you lift your hand off the lower split it sends note-offs to the upper manual! Definitely an unresolved bug. I tried all kinds of workarounds, I have a MIDI-Ox profile that sort of works, but setting the split channels in the organ itself and setting them on the MKB-300 and running the board in upper mode solves the problem. Yes, I even tried the Scope MIDI filters to no avail.


The Leslie 147 is an Amplitude 4 item from IK Multimedia which I scored with reward points so that was a freebie. To me, it's the best Leslie emulation out there. I use it on every B-3 VST I have and on the B-2003. Everything is MIDI controllable so the swell, rotor speeds, acceleration, brake, etc., can be changed live and the MKB-Buttons do the job nicely. 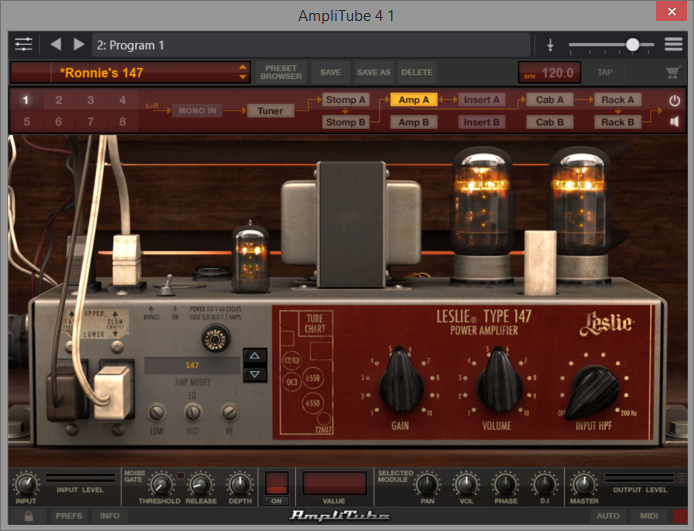 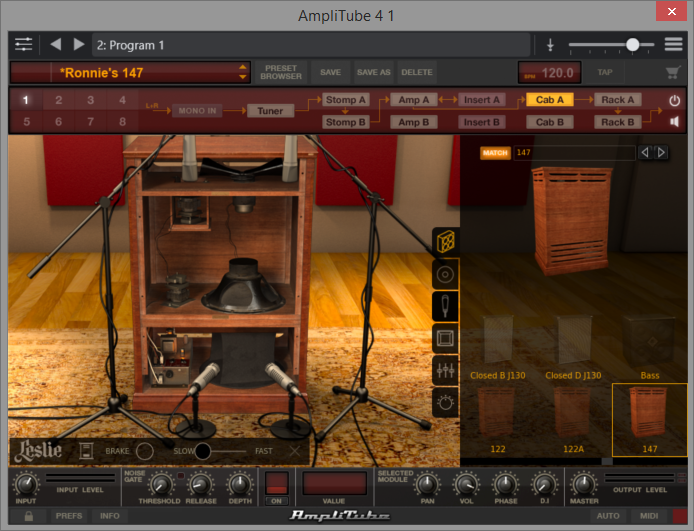 
Using the Leslie emulation on whatever B-3 you're using and set that up too and have it controlled by the same controller, you can get some really fantastic, thick Leslie sounds.

That's all for now.
"I’ve come to the conclusion that synths are like potatoes, they’re no good raw—you’ve got to cook ‘em, and I cooked these sounds for months before I got them to the point where they sounded musical to me." Lyle Mays
Top 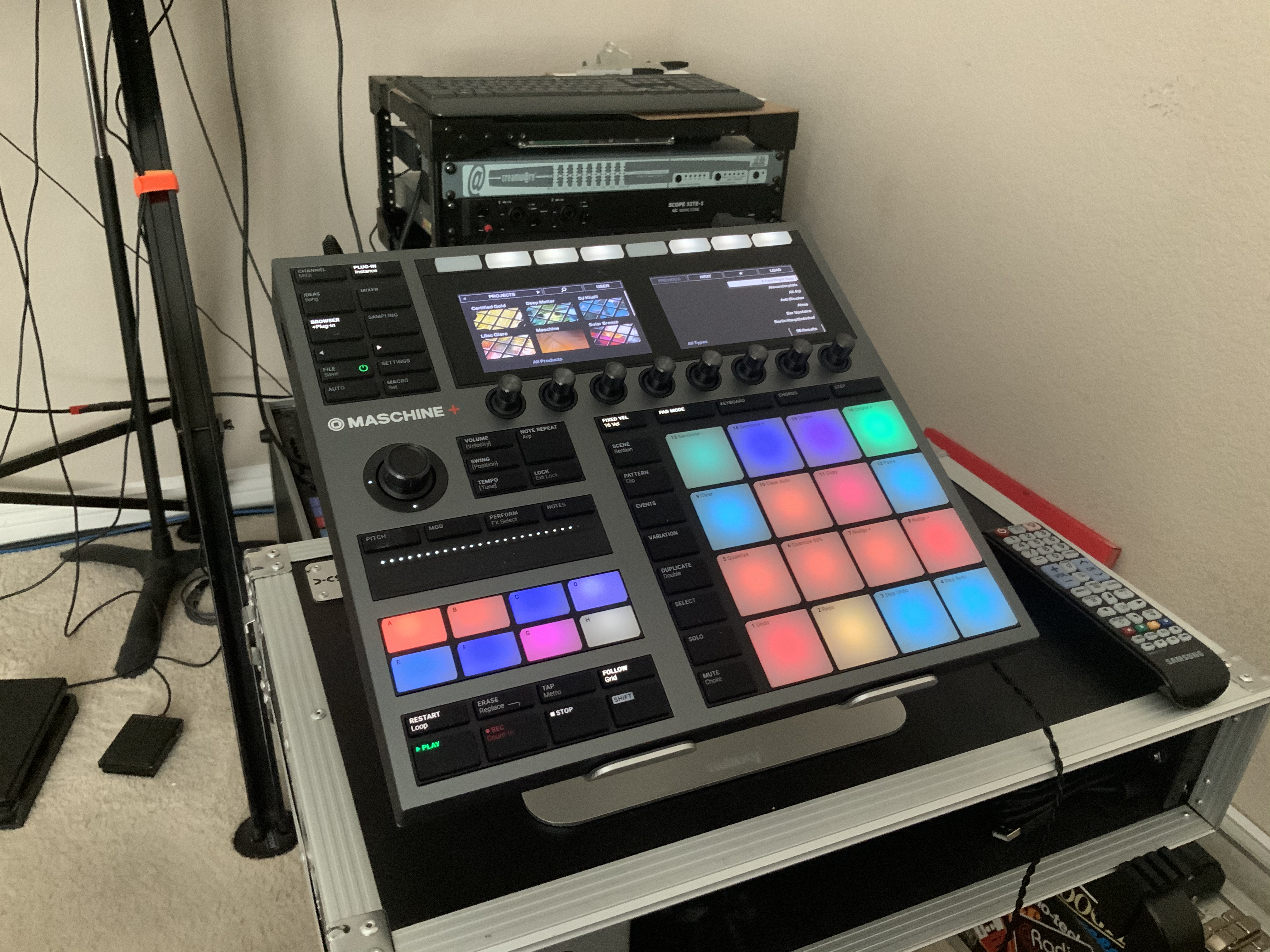 For whatever reason, I love my little 7" monitor running PG-AM and want more options in this regard. Looking forward to giving this unit a shot, even though technically it's fed off of a plugin or digital input rather than my analog board (which is what I do now with PG-AM).
Top 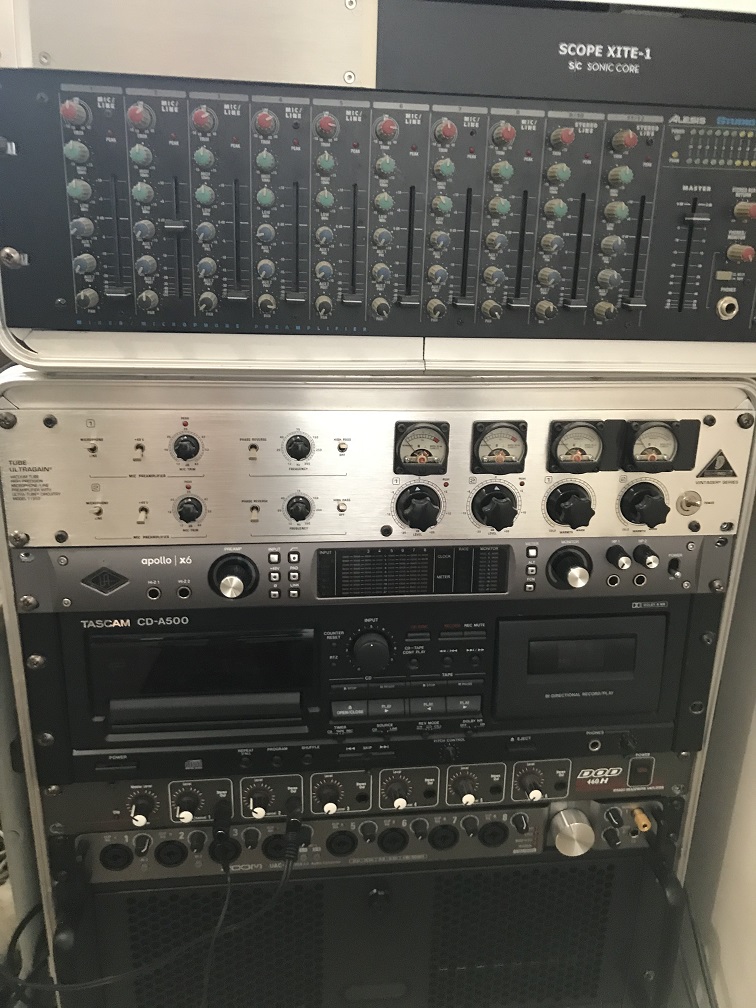 The Apollo is nice, but I'm digging the Tascam =]
Top

was that the mystery synth in the last NAMM?
Top

The Tascam is a workhorse - and one of the best features is the remote which is oh so convenient when cueing stuff up. Opsix looks interesting but dont they make rack synths anymore ?
Top

OpSix is just another FM synth.
Buy an FS1r in a rack and smoke that Korg.

Or get a WaveState so you can at least get creative with FM + routings.

WaveState was so deep I chickened out and put mine back in the case.

FS1R is in the rack already, and my wavestate right next to it

Yep I thought of the FS1R as well but that dawg doesnt do wavefolding and blend w/- ringmod. Better protect your scalp with anti itch cream...
Top

Looks like the BCR-2000 has a successor, this time the Zaquencer is built in from the get-go alongside the midi encoder functionality, and they are daisy-chainable and supported on iOS etc.
Top

Shame about NAMM 2021 being cancelled - I thought they were planning it as an online event.
Top

Shame about NAMM 2021 being cancelled - I thought they were planning it as an online event.

Saw that, didn't think it was as interesting for our crowd but it might make a nice rompler+sequencer to use alongside Scope.
Top