HI anyone tried those ? they are like superknobs from djtechtools, but way cheaper.
There are tons of cheap potis of all size. The user review are not helpful at all (they don't say if they fit well or are wobbly etc).

I am looking for this because i am going to get a small akaimidimix, and it needs a complete change of knobs. It is to use with Aquarius drum devices (the akaimidi mix has a 9th fader and it can send all values to daw with a "send all" button, so I guess it is the best to create "snaphots" of all midi CC.

I've never been a fan of ordering direct to china, but the price is just 10 times less then in shops (and the stocks are full).

Perhaps always made in this country of origin!
For that price it’s a no lose
A long wait rewards those not bothered by a large container ship blocking the suez or due to covid flights are rare
Purchases will also be rewarded you with Ali-coins
I too await knobs like these, yours are cheaper but the same - watch postage costs and tax
Enjoy
Top

Hard to beat that price, but I would go with djtechtools as they will work and be what you expect. Also, it's good to support companies that you want to stay around with your purchases.
This reminds me, I need more knobs to customize my two midi fighter twisters.
Top

E-b/a;y does a nice selection of knobs and colours and probably have stock already in your country for faster delivery
Typing ‘colour potentiometer knobs’ returned many styles and dimensions - 8 colours for less than €10 and free delivery too
Top

Yes, I did my homework

But specs are 15 mm or less base diameter, D shaft 6mm.
makes it harder to find good ones here (sometimes specs are not complete so it is not sure what you order on ebay or amazon).
plug-ins for scope
SpaceF website
SC website
Top

I use these guys for years now.
Be sure you match the knob rotation though.

They take returns when you screw up. I’ve returned more than once due to human error.
For example, SE-02 just refuses other knobs as there’s little space.
I returned them for others.

My latest custom knob job was for Peak.
Turned out beautiful. 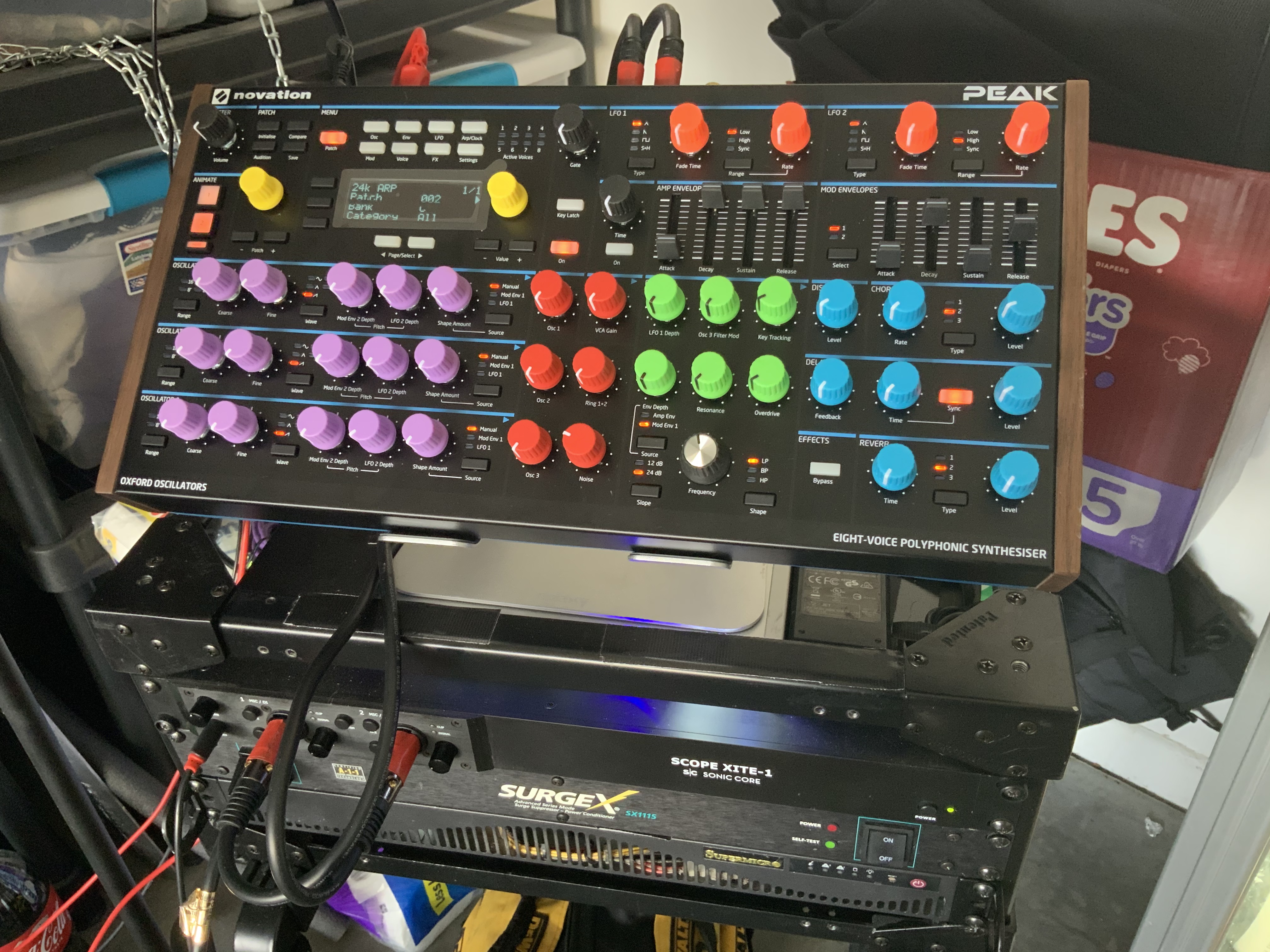 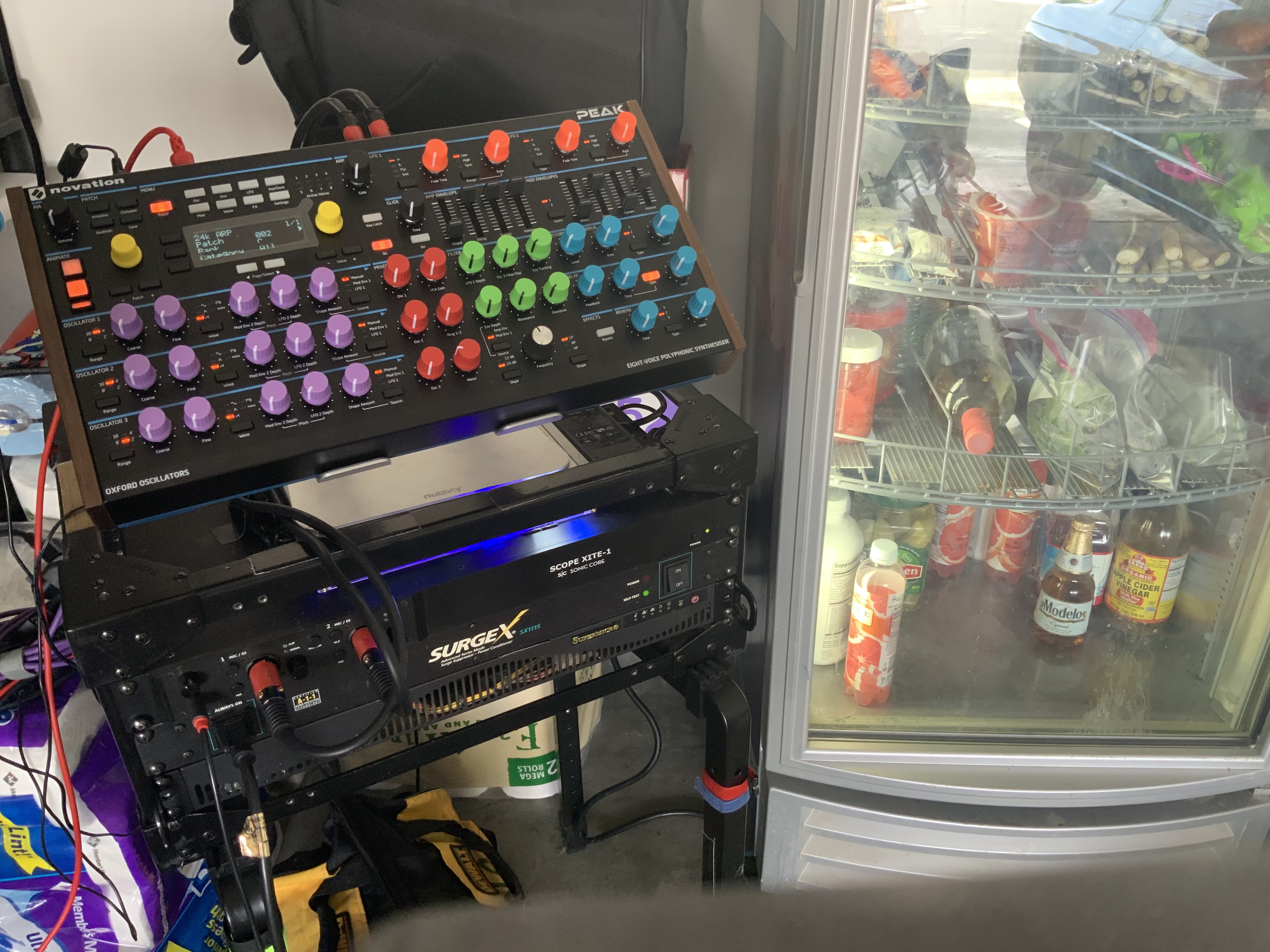 I like the green - and I dont mean the knobs

I have a very similar Dewalt bag...

And I need a new rack someday. NIce stuff there....
Top

well if anyone is interested, I will not buy any knobs from anyone because i just got a 2nd hand akai midi mix, and eventhough it is really cool in many respect (size, faders, pots etc) the buttons will only work with ableton live. In normal midi CCs, it works as temporary knobs only... useless. Disapointing... I wanted to use them to open/close devices. I'll keep it a couple of month.... or use it in the DAW (there is a trick to make it work with studio one).
A part from that the midi mix pots are better than i thought

pots and faders works very fine (and i like the short faders which allow to use it as an on/off switch quicker than with long faders....so it is possible to work with it. It is still one of those piece of gear that makes you wonder why the maker introduced such limitations (the software could be easily modified by akai i suppose)...

It's second hand and cheap, but if it was new it would have been returned immediately. Not a rant, just information that could be useful to someone, i 'm gonna map the controller to scope this evening and have fun with it anyway... sigh.... I will probably end up building my own controller....or wait until i can get something serious (fader fox stuff looks cool, but still not what i would build myself)...

I thought that taking one second hand would be a nice gesture for the planet, and would pay for replacement knobs. I guess that it's even better for the environment because I was ready to order some chinese junk pots though (not the ones linked but similar with lots of colors and internal "shaft" so it can take any angle that you need)...

That's odd, all of the track controls and buttons on my APC's are simply sending various midi cc's (and notes for the clip buttons I suppose, which might be the issue here?) I know you're competent enough to have opened up something like MIDI-OX and confirm what you're saying, just think it's odd as all of my Ableton controllers send only basic midi to begin with, so curious what they did with this unit.

Btw, still waiting to see the BCR32 emerge, as it will save me from buying the SSL UF-8 which I really don't need.
Top

There is nothing in the editor to change the button state from "momentary" to "toggle", apart from that it is nice and devices respond very well to faders and potis. It is something known once you dig the forums or look for answers on the net.

It is just Akaï who did not work their editor software to edit much . It is not a "real midi controller" but more something dedicated to ableton live and that can work in other daws with workarounds according to info found here and there (special setup in studio one, scripts in reaper...). I mean what midi controller doesn't allow to choose button action, and who need "momentary" by default ... but it is made for ableton so they disregarded other usages apparently.

For example, Ableton live mute/solo/rec arm respond to Notes on-off message (1 note on/off = change button state - which is the midi mix default setup). It has to do with leds feedback. The leds on the hardware will not lit when the button is pressed on the hardware, but only when information is sent back from ableton to the hardware. I tested and they light-up when the proper note-on is received. I haven'tfound a way to switch them off though^, lol.

This is probably because you can move the hardware to control the next 8 tracks , so i suppose it is a way to keep data dynamic, not assigned to a specific control, but to an internal engine. That part works very fine as i tested with the owner on his setup.
Ableton just sent me a key so i can install ableton lite.

i use midi ox very often with the big monitor. there are also discussions in bome's forums but it looks complicated to modify the midimix behaviour. I also thought about a device to convert the momentary into toggle but who needs to use dsp to get basic functions*?

But I just had a blast with potis assigned to various parameters of my drumboxes so it is fine. just annoying that the buttons are only useable inside a daw because they can't "toggle". i could use them for aux sends, but their is no way to set min/max neither. the midimix editor is very basic, you can install it and make templates even without the akai midi mix.
It would have been perfect for me if you could just use the buttons as toggles. i'll resell it in a while for the same price so..no harm.
https://inmusicbrands.force.com/akaipro ... mix-Editor
Last edited by spacef on Sat Apr 03, 2021 10:37 pm, edited 1 time in total.
plug-ins for scope
SpaceF website
SC website
Top

Ah that makes sense, and you're correct. There are lower buttons on my APC units that do mute/solo/rec arm and they are latched (toggle), but the upper buttons for triggering clips are momentary and only stay lit when sent midi info in return. So I suppose it makes sense the midimix inherits that.

In a similar size/format I have the Novation LauncControl XL and it does have a few buttons that only work properly in ableton by default (the far right buttons are shared across all 'channels' for mute/solo/rec, but the lower buttons have only 1 row that are not for selecting tracks).

Btw the 'track select' buttons on all Ableton controllers merely change the midi channel that is 'seen' while that track is 'selected'. Select track 1, and any relevant controls now also send CC's on midi channel 1. This novation inherits that as well for things like mute/solo/rec buttons, but their newer software allows full customization *I believe* (don't quote me on that, I use the controller with Magic Music Visuals and a few other VJ apps and haven't bothered to dig in further with it).

My other AKAI units (MPD32 etc) are all fully editable and can be set to momentary/toggle and so on, so it's unfortunate that your unit doesn't do that.
Top

yes the lower prices are all optimized for ableton live. they generally loose the possibility to have several pages of CCs in one template, and replace that by the ability to control groups of 8 channels in DAWs. at least from what I saw also with Korg Nano kontrol 2. It bothers me a lot that the leds of the Novation launch control XL only allows orange/yellow/green color, and that leds are not fully RGB/RGBW color programmable

. I also saw a video where the leds generate a buzz on a guitar when you play guitar on your desk with the launch control in front of it (it's a problem with some old-school led engineering, where leds can be noisy, but that could also be a problem of the guitar or particular steup of the guy making the video).
plug-ins for scope
SpaceF website
SC website
Top

Single coil almost assuredly, even with bass (where you can roll off the highs) it's incredibly susceptible to noise and feedback. Humbucker fixes that for the most part, as long as you have some distance.

I'm with you on the novation having a 'look', alongside my Push2/Maschine Studio and other Akai units it does look rather earthtoney when in use. I don't pay that much attention to any of them really, the Push2 is probably the most svelte but since it's only me in here those aspects kind of disappear. What I like is to setup a controller to do the things I want it to do, and let it do ONLY that. Can't stand trying to remember what page 12 on some generic midi controller was assigned to in the studio, when I can just reach for another set of knobs & sliders where the same knob always does the same thing...

Plus when you collect over 25-30 years it's very easy to have a plethora of crap lying around to work with, I suppose.

Anyway from checking out your devices, I can see why this matters for your workflow. That control brain kit you linked in the other thread seems to be a good direction to head, and midibox back in the day would have done just about anything wanted from endless encoders to Logic/Mackie/HUI emulation down to simple midi buttons with visual feedback. The real issue there was just not having a feedback loop when you set it up properly...
Top
Post Reply
18 posts • Page 1 of 1