Shroomz and I are proud to present you with a sneaky peek at our first Scope synth - The C4T Monosynth. It's based on our Octave CAT which is one of my favourite monosynths. At the moment it's still an early beta and we plan on adding several new features as well as a few more tweaks here and there to get an even closer representation of the original.

Poly mode still needs some work. Like the original CAT, it allows for duophonic playing by sending the high notes to VCO1 and low notes to VCO2. I have been having some trouble in getting the key split to update as I would like though. It is stable but it has a funny logic to it as it responds differently depending on the order you play the low & high notes. It would be OK for programming from a sequencer at the moment, but it would certainly take some practice to be played live. The synth should however work as before when MONO mode is selected. All the same, please let me know if you notice anything wrong.

NOTE: The C4T being a monosynth only requires 1 voice (even in poly mode) Setting the voice count to higher than one will only eat up DSP.

Halleluyah ! Thanks for that guys. I'm off to check if it sounds as good as it looks...

I can't believe the rate at wich you guys pull out new devices....

Fantastic sound !! I'm blown off. The S&H is a miracle in itself...

Go ahead !
A small quirk : I can't go over 4 notes polyphony since I have two PII cards and the Cat as it is now seems to be locked on one card (no spread)...

Now, where is Scope4live when you need him ?

great naming: C4T, at least with your font choice for the logo

It's looking fantastic bytheway, very clear design, even when it's mainly a copy of the original

No (hidden) 2 octave keyboard?
I always like to have instant access with soft synths.
Edit: ah, I think where you changed the power knob with 'Page' I will find it...?

Are you trying to stay close to the original concept (except the usual modern novelties which are part of our global consciousness)?

Otherwise I would like to see low-fi circuits as on the Elektrons (bitrate/samplerate reduction, distortion or SID-like primitivism).

Wavelength' OP8 and sparC (monophonic...) offer that, and I like it very much.
It would be a way to add something new to an old proven concept.

I mean, the C4t isn't an pure emulation or meant to be, so pricipal objections can't be very relevant.

Btw., does the original one phase-cancelate your version at the same settings?

Just to inform, this is on Synthforum.com:

The Cat is similar to the ARP Odyssey, but not as similar as some people think.
Things that make this synthesizer unique are: The 2-voice keyboard, which has a second sample-and-hold for
the second voice, so both notes die out when you let go of the keys.
Each oscillator has a sub-octave output allowing you to get 4 separate notes from the machine at once (although two
must be octaves of the other two).
VCO 1 also has a triangle wave output, which ARP left off of the Odyssey.
Finally, the keyboard is switchable between 2-voice (poly) and 1-voice (mono) modes, allowing you to work
monophonically if you want to.
The ARP can't do that, so if you're using the ARP's ring modulator you will get random timbres if you
aren't careful to release each key before pressing the next one. 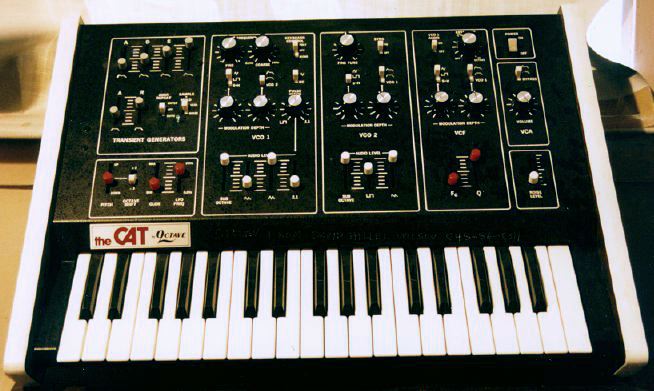 yeah sharc,
there it is after months!

I`ll check out this new version....

It already has a great raw sound.

this is great! very raw sound...im not so fond of the big white side panels though. also +1 for some bitrate reduction - good idea.
cheers
Top

I just had one crash with this synth

And some problems with polyphony....
q: is it just made for one voice ? monosynth like the label says?

My ears tell me that Oscilator 1 is syncing to osc2 although osc2 has the sync switch. I though VCO2 should sync to VCO1? right?
do my ears fool me?

I got no CAT nor do I ever had one, so I may be wrong.

But I get some great sounds out of it.

I also aggree with others that the white ears don`t look to good.
What about just cutting them away? + a darker coloured backpanel ( black?) with pigmentation, like its done on the prodyssey

that lfo delay on the real thing sound interesting too...
Top

here is a small sound sample

http://sonicwarrior.freehostingnow.com/kvr/cat.mp3
played through an interpole insert with delay....

looks fantastic - looking forward to use it

haven't used my pulsar for a while as I've started playing guitar in a band again..
but heyyy ...
Thanks

Btw., does the original one phase-cancelate your version at the same settings?

hehehe, it would be near impossible to phase cancel two real Octave Cats

hifiboom wrote:I just had one crash with this synth... And some problems with polyphony.... q: is it just made for one voice ? monosynth like the label says?

... YES, it's only monophonic (1 voice) at the moment. Hopefully we'll be able to implement the original mono & poly (duophonic) modes . For details of that & other queries regarding functionality & specs, please take a look through the original CAT manual, which is online here >> http://www.octavecat.homestead.com/OctaveCatManual.html


My ears tell me that Oscilator 1 is syncing to osc2 although osc2 has the sync switch. I though VCO2 should sync to VCO1? right?
do my ears fool me?

Your ears don't fool you. That's the way it's supposed to be on the CAT.

that lfo delay on the real thing sound interesting too...

There was no lfo delay on the CAT until the SRM models, so the picture you've posted which shows the lfo delay is an SRM model (you can also tell this from the type of knobs on it). Our model 1853 does not have lfo delay. It would be a cool feature to add to the additional page if there's enough space though.

We'll take a look at the side panels.

Thanks for all the comments & feedback so far everyone!!

shroomz,
thanks for that pure and straight information....

cool stuff it is! And it def. has a great sound. And thats what really counts.

The add page features and so sounds good.

PS: do you have a real cat at home?
Top

the beauty of real analog synths is just unmatched, isn`t it?

btw,
how close does the plug-in hold up against the real thing?

did you find a CW filter in SDK that matches the CAT filter?
Top

This version is using a stock 24dB Lowpass retro CW filter. The ranges and control curves are tweaked to get a close match to CAT specs and response, but it still falls short of the mark. We're hoping to create a closer match of the discreet filter from lower level atoms. We'll maybe have something on this front for the next update.

As for the general sound of the synth at the moment, I'd say it's not too far away from the original (especially since we modified the VCO waveforms). I'm not sure how close exactly we can get it to the sound of the original, but it's already sounding very CAT-like.
Top

how did you modify the oscillators? I noticed that some analog synths do not have total perfect clean osc waveforms.


That filtermodelling sounds very promising, but I`m sure its the hardest work to recreate the filter closely with low level atoms.
Surley it will be worth it.

And if you succeed it will be something unique for scope platform.
Top

There's a lot going on in there, but one of the main methods we've used to shape the waveforms of the VCO's is synced AM.
Top

fantastic, this could be something

I just wanted to ask you if the sound sample of Hifiboom came close to the sound of the real one, but the answer is already there.
and lofi tricks...would it be sin to implement it? imaging, your machidrum sounding like a treble-hi yamaha...