OSS 108 is based on my first Synth plug OSS 107.
I just finalised it and intend to use it as a basis for a rebuild version of my Opale Project.
Meanwhile I release this one for thoose waiting for the Opale.
The main differences are:
- different filter
- new Oscillator instead of the UKNOW Osc used in the OSS 107:
=> phase parameter is replaced by a morphing function between Sine and PWM , and between Sine and Saw
=> Sub Osc is replaced by a Ring Modulator
=> Ghost Host include different signal processing
The preset are based uppon thoose of the OSS 107 with slight correction on some of them ...

Hope you enjoy it.

Once again many thnaks to Neutron for is open projects which helped me a lot to learn how to build device and ShroomZ for his beautifull GUI elements ...
Top

And here is a short quiet DEMO using 4 OSS 108 instances and 3 Sharc LOOP Mid Seq I wanted to try.

Just to give you an idea...

[The extension mp3 has been deactivated and can no longer be displayed.]

The Midi CC mapping is just the same as for the OSS 107.
It is intended to be controlled by a BCR 2000 for which I provided the template.
I also did this for the Novation X-Station (less straightforward ...).

Also Preset compatible with OSS 107 (this mean it can read the OSS 107 preset but will produce slightly different sound and may need some tweakings).
Top

Thanks Huro, I will try it soon as possible

Works on the XITE-1.
8 Voices all on a single chip the way I like.
10+ voices requires more than 1 DSP, but the synth is FAT and really would be better if 2 instances were split/layered instead of a single 16 voice instance.
Tubby little bastard.

sounds great thanks a bunch. Can't wait to give it a try.
Top 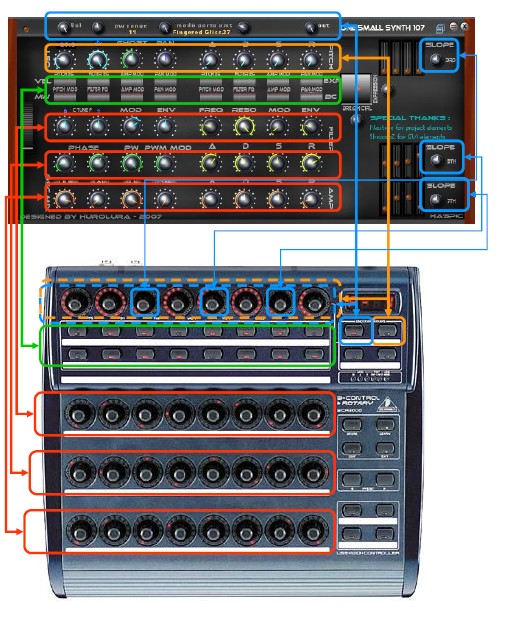 By the way the BCR2000 is still up and running here but focussed on some different non-scope synth engine for the moment ...
Top
Post Reply
10 posts • Page 1 of 1