1 correction in LogiQ and new devices:

RETRO 5
========
Same Kick/Snare with hats and percussions that can mimic famous vintage sounds
You want vintage sounds? just make sure all modulations are at zero (except for the hats).
Vintage drums don't have modulators, but Retro 5 does, so it goes beyond cloning.

The color codes are the same as in Aquarius in the case you have colored a midi controller, so using either device will match the colors.
-> sound demo in "Auto-Drummer" mode : https://www.youtube.com/watch?v=h1ozC3tH0vk 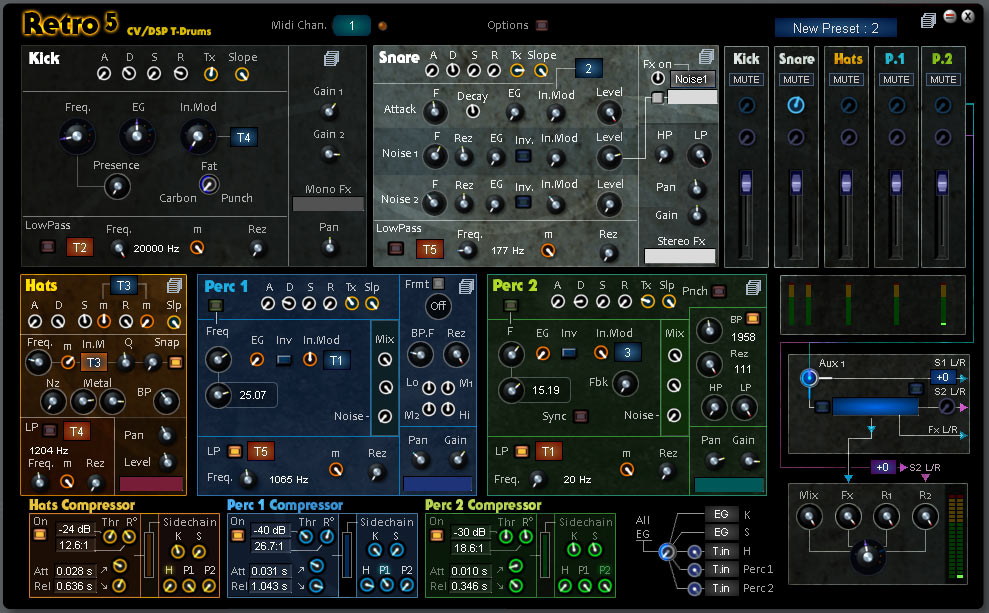 
KiS
===
Kick and Snare to be played with a midi keyboard.
You run in while Aquarius/Retro 5 are in auto-drummer mode.
Simple as connecting the midi input to a keyboard.
Can import Aquarius/Retro 5 presets (same sound not guranteed due to different envelopes and tuning).
Pitched over the entire keyboard, split note is editable, independant pitch bend and master tune 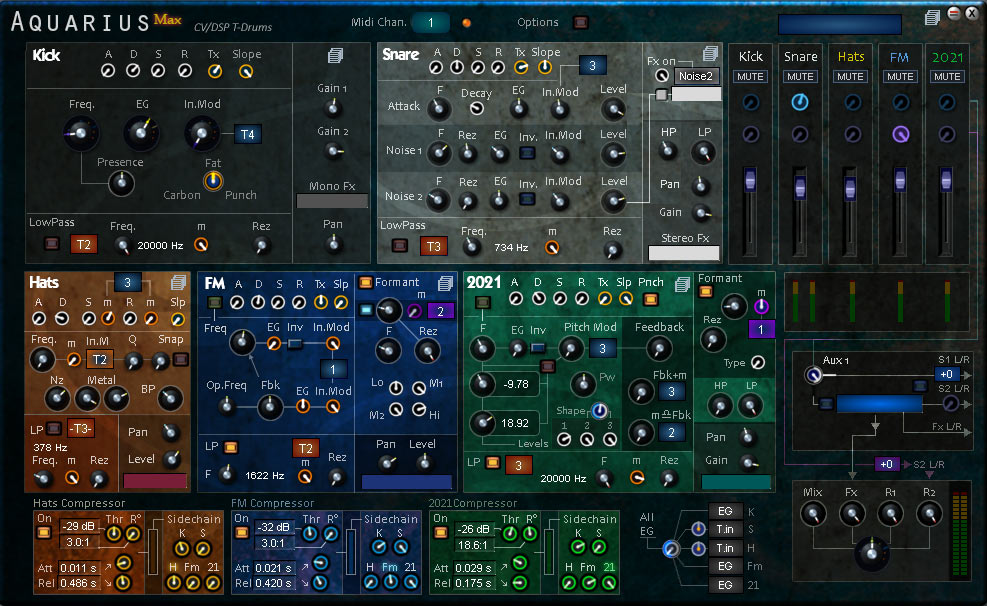 Sweet! The man is unstoppable. Thanks Medhi
Top

Unstoppable, yes, I couldn't even stop myself, lol.
I still have to do a manual, in case that there are parts that are not obvious to everyone...
But right now, all I want is to use the devices

My default project in Xite
By the way, there are discrete mono outputs for Kick and Snare on Kis, but they are not very useful because you can simply pan each section full left or right and get each sound on a mono channel.... The discrete outputs are "pre-pan" (and pre-stereo insert of the snare). 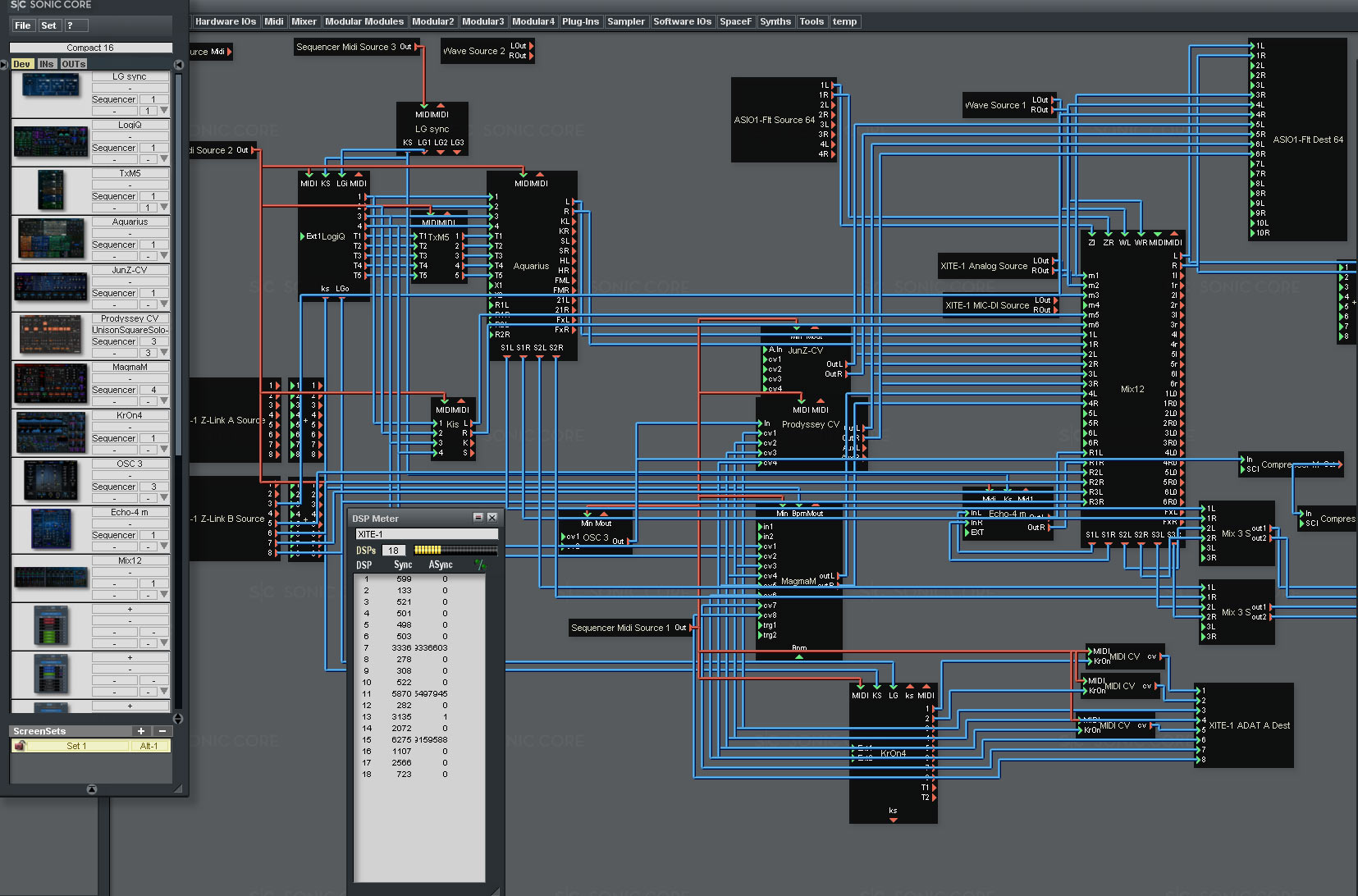 I could not leave you without Mix 12 (AttenuMixer12), the device I have designed especially for live mixes with Aquarius and KrOn + external mono synths or eurorack outputs: especially because of the "solo" button of the Z and W channels (it mutes all the rest = easy way to mute KrOn and Drumboxes as well as aux returns that are "pre" faders).

So, it is a small mixer for live purposes. 6 mono+6 stereo channels, and that's it (you can use two in chain though, ort even in parallel, by using the Mix3S below).

There is a very limited amount of insert Fx. The aux is rather extensive though.
Also, the fader levels are attenuators and there is no gain. There is a pre-gain though (from -6 to +12dB). If you need more than that it simply means that your levels are wrong somewhere (or lack a good preamp if it is microphones and guitars).

The faders are also used as on/off for live mixing; as there is no gain boost, you can confidently play them between 0 and Max and never fear to saturate the outputs.

No solo channel (only the solo button of W & Z channels - which is in fact used to mute the mix in order to make a pause on youtube, or phone call, or whatever).

It is the same aux section as Aqaurius/Retro5 mixer (but with 3 aux sends).

You will also find "Mix 3S" which has no surface controls and which is used only to merge aux sends from various sources (ie, i can merge aux sends from Aquarius/Retro5 and Mix12). Not sure it is useful for other puprose than a live session wiuth KrOn and Aquarius, which is the only reason why this mixer was needed...

Then, once you recorded your tracks, you would just load a project with your favorite mixer. 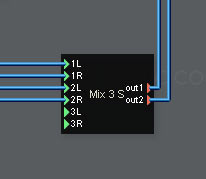 next week I will release a device that allows to hack your Tesla Car wheel sequencer, or SpaceX rocket lander compressor (yeah, beta tests went very wrong lately...those rocket crashes are all my fault...).
No, just a joke , hehe.
Have a great week.
plug-ins for scope
SpaceF website
SC website
Top


The project in the video 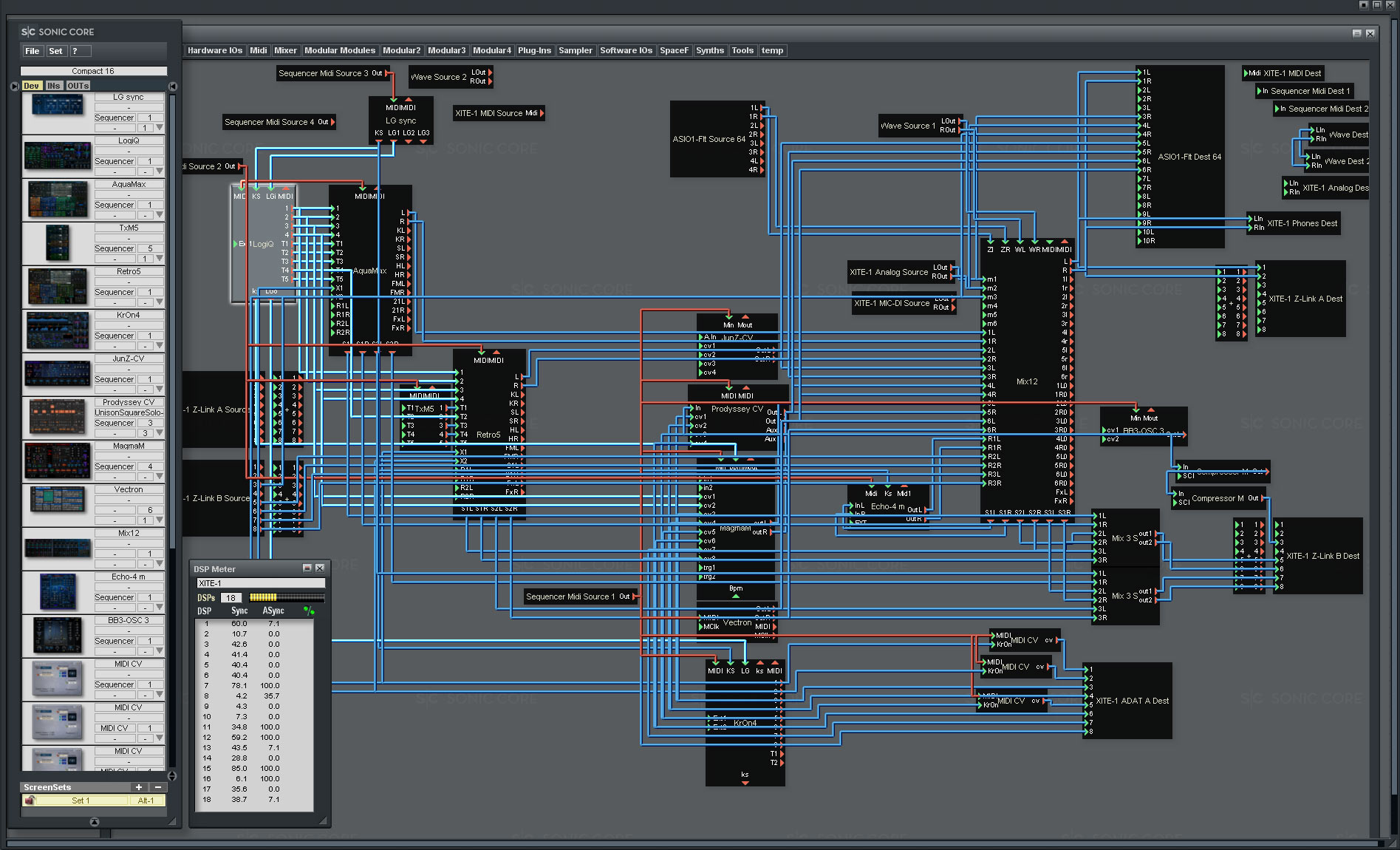 AQUARIUS LOGIQ
Additions:
– You will find mono outputs on all drum devices. These mono outputs are “pre-pan & pre-stereo inserts”, These outputs may make it easier to record drums quickly on a DAW, or to sample drums for your drum samplers. Sometimes, your project is so big that it won't let you have enough ASIO inputs, so these mono outputs might save the day in such cases (eventhough you will need to mix the drums in the DAW because you loose the volume controls of the mixer and aux and stereo effects. You keep the mutes only. So this will have to be post-mixed in the daw.
Only the stereo outputs allow to keep pan and effects and levels (what you hear is what you record).

Corrections
– LG Sync Pro preset list was named “TxM5”, corrected.
– FM Ratio: some people, me included, have seen an error message about a non-connected “FM Ratio 2" pad. Eventhough this message appeared once and did not bring any issue (the device work fine after the message), I have searched for what could cause this error. There was a pad in the FM engine that could be the cause of the message (it is a pad that is not used, it's called "Ratio" and has a value of zero (it is the RC Pad of your FM Oscillator in SDK, that is weirdly connected "by factory's defaul)
- As it happened to me only once (in a context of heavy dsp reassignments) , I cannot test fully, but so far, all seems good, the devices work just fine.
– Minor corrections here and there (mainly graphics).

In the previous version, I did not notice that a suite of various modules were actually creating a proper envelope follower !! I wanted to use the least number of modules, and ended up with an envelope follower, lol... with a feedback, it could probably become a proper ladder filter (I will have to try that later, lol).

Therefore I changed this. It was difficult to find a way to make it work without going back to my usual mixer routings (which do not have this "bug" but are also heavier in terms of required ressources).
So I came up with this solution which will be enough for most people. There is still a bit of lag time, but it is much less obvious, yo ucan still move faders fast and it will respond quite fast too...
I am still working on another technic to see if it is going to make the fader even faster AND without clicks or artefact when moving the faders very fast, but it will take a bit of time. This version is given anyway, because it is needed as the previous version was not very useable for its own purpose...

You will also find two potis that change the look of the mono and stereo sections (I wasn't at my best artistically speaking though, everything is a bit psychedelic

The latest versions in action. If you have a dual-monitor setup, you should be able to see everything in almost 1:1 size (the vid size is 3840*2160).

Please note that the akai midi mix is really cool but the buttons work only in ableton live (in plain midi they are only "temporary" or "note-on", but it is not possible to assign them to mutes of a mixer (doh!).

They can send notes-on though, so I use them to trigger drums when editing. But here the midi notes are off (you can see me pushing buttons but no sounds because midi notes are filtered out to avoid "drumming by mistake" !). the size of the potis is fine, it's just the colors that makes it difficult to know which column it is (i will probably do a layout just for this drum box).

Re: Aquarius LogiQ - A new drumming paradigm for the new area :-)

Peter Drake wrote: ↑Sat Feb 13, 2021 7:11 am Purchased. Looks like a ridiculously inexpensive bargain, are you charging enough for your time?
Can't wait for my key.
Everybody, support Mehdi (and other developers) with your purchases so that we can continue getting tools like this that don't exist anywhere else outside of Scope.

This. Shame more people don't know about scope or realize its greatness.
http://www.mutationaudio.com

We can change that.
Top

Hi All !!
Mutation Audio has released a track featuring a few sounds from Aquarius. Snare and hats, with a very early version that had only LogiQ for auto-drumming, no midi, 174 BPM
https://ffm.to/dancingfree?fbclid=IwAR3 ... ll3bAJOeKE
https://www.facebook.com/mutationaudio/
give it a thumbs up !