A place to talk about whatever Scope music/gear related stuff you want.

I’ve noticed that panning in the STM mixer is actually a stereo balance control rather than true panning
Is there a device in the Scope environment that allows true panning?

what if you use 2 mono STM channels?
Top 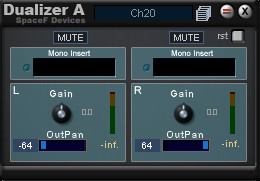 Well if you have a stereo file with different info in each channel you will lose one of the sides when it’s panned. A true panner will move both signals together. A pan can be a balance between left and right or movement of both signals into the left and right channel.
Top

but I think you can do it with 2 mono tracks.. isn't that right?
Top

what is the purpose of a stereo file, if you plan to pan it?
Top

Well you can have a stereo file with 2 bongos or a mono guitar with stereo reverb.
Panning the whole signal is different to stereo balance.
Top

no, i get what you are concerned about, at least in theory.
but...

when you pan that whole stereo file close to one side or the other, the net effect is a mono file.

stereo files are for when a specific stereo effect is desired, but that requires the pan to be near the center, anyway.
Top

It’s fine, my DAW does it but I was trying to achieve it in Scope. I will try mono methods and Dualizer over weekend.
Top

actually in pro tools and in ableton for instance you can do it in.... BUT in STM you have the stereo balance(which I personally would.t like to loose)... + you can feed the signal to MONO channels if you want individual panning....

I get the convenience though of having the stereo channel divided to 2 mono channels on its own, internally, because you can have its effects for both L and R channels....
BUT personally I find it a little messy.......AND There are even more combinations we could imagine of a stereo channel that could have...

yesterday specifically I was doing comping / (mixing and mastering ALL in SCOPE) of a pianist. She had recorded the piano with 2 mics directly to piano chords... At the end of the mix I found that L (Low notes mic) and R(high notes mic) was very WIDE in image... More stereophonic than the normal of listening to a piano from a distance.... So actually I had this problem to deal with,,, the WIDER stereo image...
BUT in STM I could split to 2 MONO... which this could give me The individual panning...+ INDIVIDUAL EQ and COMPRESSOR.... + even more combinations of individual channel sends etc...

So.. in scope.. the old school stereo ONE knob....is a feature of simplicity I wouldn't like not to have personally....
Top

And .... we HAVE IT in scope ACTUALLY

anyway, everyone is certainly able to do as they please.
Top

yesterday specifically I was doing comping / (mixing and mastering ALL in SCOPE) of a pianist. She had recorded the piano with 2 mics directly to piano chords... At the end of the mix I found that L (Low notes mic) and R(high notes mic) was very WIDE in image... More stereophonic than the normal of listening to a piano from a distance.... So actually I had this problem to deal with,,, the WIDER stereo image...
BUT in STM I could split to 2 MONO... which this could give me The individual panning...+ INDIVIDUAL EQ and COMPRESSOR.... + even more combinations of individual channel sends etc...

Exactly one of the uses I need it for. 2 mono channels can also cause phase problems and it’s actually just one side of a stereo channel in architecture.
Top

And .... we HAVE IT in scope ACTUALLY

Yes for pan law, but it should apply only to MONO tracks, and at center to compensate for the increased volume when things are panned center versus to one side or the other. Also there's 3 standards more or less now, -6dB, -3dB & -3dB compensated (the latter applies a bit of a curve as you pan iirc) and -4.5dB is what SSL consoles use.

-6dB is the 'ideal' in that a mono channel's perceived level in the 'mono' output bus of a console won't change as the signal is electrically panned across the stereo field, but it was decided that in a typical studio room or mix room the center image might disappear a bit in the mix due to the business of the center of a mix bus and due to the amount of reflections in such a room, so -3dB was a 'middle ground' between -6dB (numerically more perfect) and 0dB (which is easily percieved in most cases).

Now back to the OP's question, what it seems he's asking for is the 'dual pan' that you get when you use mono channels on a console and pan them separately left & right. Dual pan controls lets you pan each channel to control width, and this in the digital era is often replaced by a M/S tool (center position & width being what you have control over). The reason Pro Tools had the dual pan implementation is twofold, but largely because many people would have their PT rig running THROUGH a console and the workflow was similar/identical. That and 'broadcast wave' files which were the standard in PT forever (might still be?) are essentially two mono files as well, so the dual pan makes a lot of sense here.

Stereo files and stereo busses will NOT have the same 'pan law' applied, ever, at least in theory. This is because the information in each channel is *already* separate and not being separated just by pan position alone. When Scope was in its fastest evolution, pan law was being sorted out in the DAW industry and each DAW had its chosen standard. In this era, most DAWs give you at least a few of the options, and still most of them also only apply pan law to mono channels...and most also give a M/S tool for when you want it. Also I some will change behavior when they load a session that has broadcast wave 'dual mono' files, and this is all long before signals enter Scope.

In the end, a lot of this had to do with what happened when you translated a mix from the DAW to a console or back, or sent it from one studio to another. Having a standard here meant that the musical director didn't make choice in one place that didn't translate properly elsewhere because of the different standards here. If you're mixing your own music within Scope, your choices are based on what you're hearing at a given moment which is the final arbiter over what is 'correct' or not, regardless of pan law, dual pan controls, M/S controls or etc....the tools just give us the options to get where we want to go in more ways, and extra complexity doesn't always make our work easier.
Top
Post Reply
20 posts • Page 1 of 1